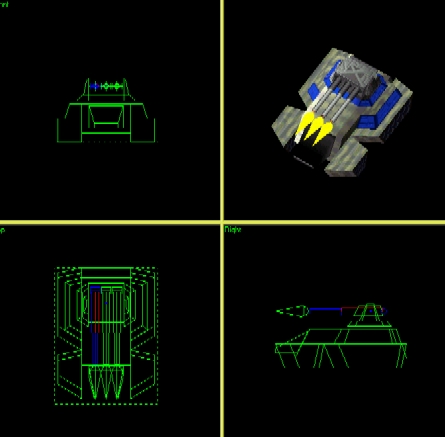 Buildpic: The only negative thing I have to say about this picture is the merging, and more specifically the shadow that messes up the overall perfection.

Model: The model is in line with the Merl and therefore fits pretty good in the OTA world. No real complains on either faces or face count can be found and a plus for the innovative hull-turret construction has been administered [5]. The texturing is pretty much OTA with proper CD 3D and everything but the lower logo layer is a bit misplaced, for it feels too much. Remove the lower logos and maybe put them on the top of the front tracks instead.

Script: Standard aiming and specific weapon alteration with a 0.5 second pause every sixth shot (instead of the ordinary 0.3).

Balance: Even through it is pretty inaccurate and therefore mostly useless against moving units, this unit is overpowerful. The closest comparison comes again with the long barrel of Core - Morty. Sure it costs much less but not even the damage/second ration of three Mortys combined comes close to the brutal damage this weapon emits. Yes, it is true that it takes two Bombardiers to get as much armor as one Morty and that the latter is 100% accurate but it is not enough. For this I suggest that the speed is lowered to about 0.6 together with the turnrate that should be halved while inaccuracy should be increased by 10-20%.

My score: As I browsed various sites, this unit caught my eyes for it looked very Cavedoggish and as known to the world outside my small evil site, I desire all Cavedog-alike units and in the /totala folder I bind them. This was not a mistake to download for the potentials are large if some numbers are adjusted. May the force be with you, Bombardier.