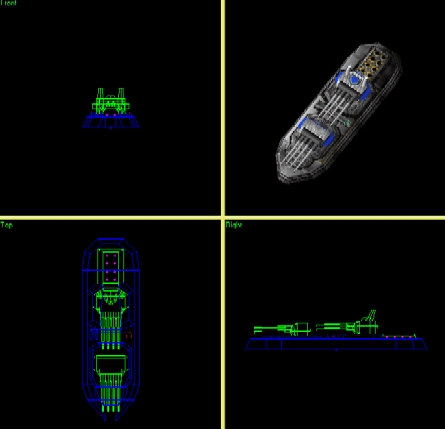 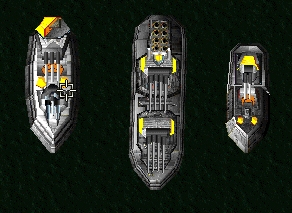 Buildpic: The unit is very zoomed in and the dark colors combined with the red signs here and there surely gives it a very evil look [4]. The background is also a bit more smooth compared to the previous one [3]. However, the merging is not as good. Many shades on the unit itself are completely offhand and there is no shadow or reflection in the water at all, unlike the Abel buildpic [0].

Model: Okay, the model is even worse that it were before. The little sense of Cavedog that existed has disappeared all of a sudden. The broad Core-ish slope on the edges has been sharpened up so much that the ship neither belongs to Arm nor Core when it comes to style. The nose is still just as bad as it was last time I saw it, even worse actually (due to the sharpening). The cannon towers are very awful, they are way too wide to be Core (even more than last time, that's why I'm saying this). The rear cannon has lost it's former elegance completely with those two prods sticking out and the front cannon should still be moved back a bit. The cannon stylishing is better, but it might get better if you pull the lower barrels just a little bit more under the upper ones [1]. The texturing on this version is just plain horrible. While the old version did look like an OTA ship, although having problems with repetivity, this one doesn't remind me of anything produced by Cavedog at all, as can be seen on the in-game screenshot. The CD:3D is present on the deck, but not on the border around the ship where the same texture has been used almost all the way around. The reason of this recession might have been the fact that I among other things suggested retexturing to more Executioner-style (the ship on the far right on the same screenshot), but the mission have failed as the unit lost all similarities to the Enforcer and Warlord and doesn't even look close as good as the Executioner. The cannons should in any case be much brighter. A sad fact and I have no choice but lowering the score [1]. The corpse is still good [1].

Balance: Not many changes have been made on the unit. The costs and stats are still the same. It does still produce 100 energy every second (although it eats 200 when firing) and have the same crumpy movement. The changes has been made on the cannons that are now 50% more effective and if I haven't mention it before, they have an extremely large splash area as a compensation to the wide inaccuracy. When testing this on Metal Islands map, I could force-fire in the middle and be able to hit all four corners, it is that inaccurate (as a side note, this unit easy fires of the shelters on the same map). I don't quite remember how good the missiles were last time, but in this version, they are deadly to the max. The only way for them to miss is if the target has been destroyed, it's that simple. The missiles can go off in the wrong direction, turn 180, follow the plane in the turn, catch up and hit. Vamps and Hawks might be able to outspeed them, but no other aircrafts can escape no matter what they do. In the start of the game I placed out a Caine outside the enemy's base and initiated bombarding. Five minutes afterwards, it still had zero kills, although the enemy base was all damaged and the solar panels could never open. I see this unit as highly balanced because of it's inaccuracy and therefore total failure in close combat (the rockets ain't enough) where it will easily lose to the twice as cheap Warlord or Millennium, but as one ship among many, it packs enormous anti-base capabilities, especially when advancing in kills. After around 200 kills, it can nail a Bertha from outside it's range in about twenty seconds.

My score: No, it lacks elegance and style and everything that has to do with extreme ranged ships and even more now, when it has been totally retextured to the worse. My psionic heart, the essence of my neutron pulse generator remains with Abel. Never ever did one single unit force me to play for five hours straight, just bringing forth my insane trigger-happiness. I did in fact storm my underdeveloped AI enemy with six Caines, but only for the overkill factor. However, a small addition is that you can force-aim on the ground close to a submarine and at least some shells will hit it.