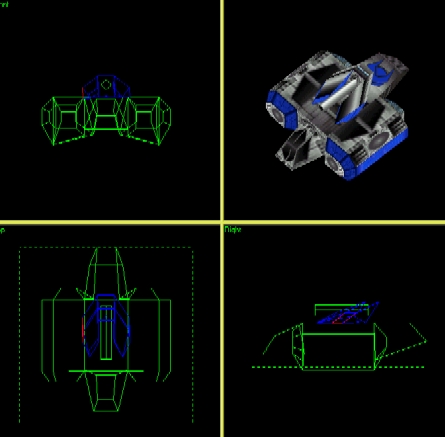 Buildpic: The angle is exellent, but the turret is fuzzy and hard to see. There is also some kind of fog on the screen, making the unit unsharp. Perhaps it's ment to be an underwater picture, since this is an amphibious creature, but alas, it's too much fog for a normal pic and too little fog for an underwater pic. After examining the picture for a while, I have to admit that it really is an underwater picture wih bibbles raising on the rear ends of the engines. To improve the underwater feeling, you should have a much more diffuse lightsource coming from above or close to while using a blue layer on everything [2]. The background is flat, but at least with some kind of non-repeated pattern on it [2]. The merging is pefect [3].

Model: Woh, this model uses a rather interesting, yet very ineffective design. The things on the sides are supposed to be turbines underwater if I understood it right and they look pretty descent, while their design is mind-breaking if seen from a face-hating view (where I stand). There are lot of hidden and useless faces in the model and as usual, I've taken the liberty to mark them out with red color and [ hosting ] it up on the page. The cannon tower looks rather stupid in-game, although I admit that it feels good looking at some kind of innovative design, while the barrel is almost non-existant. I'd prolonged it with 50% if I were you [2]. The texturing is rather questionable on certain places and all the incredible detail ammounts spent with cool textures is more or less lost in game. A place where you only can see difference between white and black, the details all automatically drowns in a grey blob. Sure the Krogoth textures looks good on the Krog, but you have to remember that he also got bright white spots and pitch black spots and while the texturing around his body is shaded for quite obvious reasons your unit lacks all that [2]. The corpse is awful... well, it is a bit wrecked and it's colored in several textures, but still... it lacks variation and lighter texxes [0.5]

Balance: The Crab cost 73 metal more than it's weapon-serial brother, the Instigator. For that costs, it is equipped with the already mentioned amphibious talents, but also a 50% speed increase, but a lesser turning ability. I can tolerate a 30M boost for the speed and 20M, 400E boost for the swimming, but there is still 20 metal units that don't count in for anything. Kill them and the ten is yours.

My score: I never liked the Instigator. I actually hate the instigator, mainly because it's such a worthless unit, but this one might be interesting to play with.