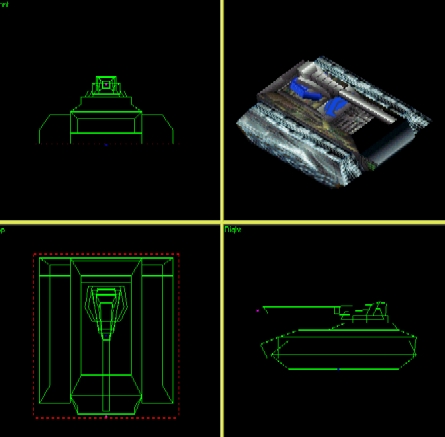 Buildpic: The only thing on this pic that is bad are the track shields. Instead of looking a bit blue, they are black and white and therefore looks more like wreckage pieces (thus the side closest to the shadow should be darker).

Model: This unit looks like Raider's big brother, but I'm sure this isn't a Cavedog Design. They wouldn't leave four useless faces left on the unit [edit: they are gone now]. It looks TA-ish and I certainly like the turret design, but it is a bit too big in the game, yous should consider making it 15% thinner (that's what I've done on my version and it looks good to me) [3.5]. The texturing is close to perfection, but the barrel and the sleeve are texxed in a really odd way, not following the illumination pattern of the rest of the body. I have (once again) taken the liberty of playing with the model and while I don't want to create yet another pic comparison, I have hosted up the [ 3do ] anyway. [4]. Thecorpse is there... wrecked, deformed and somehwat nice textured. I just dont understand why the barrel turns up like an /L" on the corpse [1].

Balance: The range has been cut by 75 units, instead of the suggested 175, but the weapon damage have been decreased slightly. To make it up to my suggestion (and a ten in the balance score) you have to cut the range with at least another 40 and decrease the shot damage with another five units/shot.

My score: My score have been slightly bumped after the balanceing, but Ixpected bigger changes for a revision... Even thou the creator went in and completely removed the useless faces on the uniderside of the track, he completely ignored my variant of the cannon texturing.