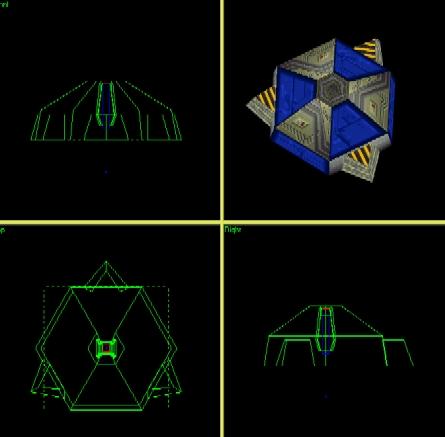 Model: The base blueprints have been directly nicked from the Core Metal Extractor (despite this being an Arm creature) with some added on details that actually look very good. The standard spining thing ™ that can be spotted on all avaible metal extractors is in this case a couple of solar panels that despite their own incredibly small size manage to lick out just as much energy from the suns as the ordinary Solar Collector does [3]. The texturing looks very good as well [5]. Since Metal extractors are build upon metal patches and no unit can leave a corpse over a metal patch, it means that this kind of units doesn't really need corpses. However this version got one and it looks ok too... [1].

Script: The solar panels flip out and rotate in a very interesting way when he unit is on... only to fold in like a flower as soon as it get hit and hide for the attack to pass.

Balance: This unit got a big error. The Damagemodifier tag is lacking in the .fbi, despite being enabled and disabled in the script and therefore, the unit never get it's armor boos when attacked. Despite the fact that this unit emits 20 energy units, it does effectively swallow 15 of them (well, still better than the OTA mex that simply drains 6E for every tick being active), this unit currently cost far too much for it's current skills. A tripple armor boost, some energy and 10 more effective mining skills are not enough, for the ordinary MEx is still superior due to the low Metal and especially Energy costs that currently cripples it's armored brother. As I stated before, all because of a simple tag. Still, when playing longer games, this unit can be valuable in some cases. After about 18.95 minutes (that's 18 minutes and 57 seconds) depending on the patch (I counted on the largest one that gives 2.2M with the OTA version), the armored version has both earned in it's total metal value and is about to pass the standard in extracted total cost effectiveness.

My score: I'll keep it for the AI to waste recources on. And I'd better change the side to Core, where it fits better. A minor tag isn't especially hard to fix either.