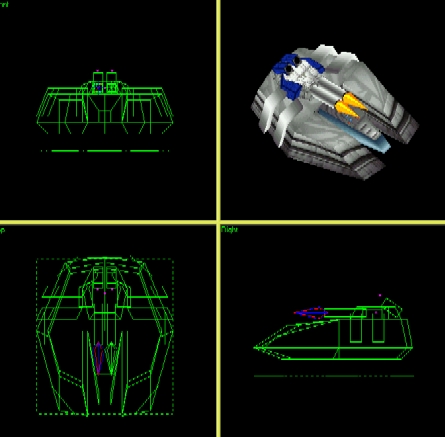 Buildpic: The angle is very good but the barrels are hard to distinguish for an untrained eye (the eye that never seen this unit before) due to our brain wanna focus on the part of the picture that stands out the most and in this case it is obviously the /cockpit/. The eye locks on the cockpit and decides that it is very fine looking at it and never care to even try to distinguish what this unit actually fires with, unless you, of course, force it to [3]. The background is sweet... some kind of dream landscape and dreams often wins my scores ; ) [3]. The merging is rather good, except the absolute lack of wakes or anything that even reminds me of wakes. I've never seen good wakes on buildpics (only one by cool man... he opened it up in paint and sprayed something unnaturally blue all around the water), so I can't blame you [3].

Model: Nice model with only one single useless face (applause in background). I like the a bit rounded form, that shows that this guy is a fatso and not a slick speeder : P. The bad move is the size of the turret and cannons and especially the missile launchers that remind me of that very little gun Will Smith got in MIB (high functionality - smaaaal size). There is one more thing that I like when people add: details. Those two ribs on either side may look functionless (and actually are functionless, but gives a brave design add-on) [3.5]. The texxing is average, nothing special. The ribs are too light with a shading problem on the sides. The logo texxing can and should be the light variant unless it's something hidden or placed low on the body. The texxing of the cockpit is disgusting. Textures on the turret could be better [2.5]. And then the copse that turned out to be the black sheep in the family. The turret and its barrels has been slightly twisted, then colored with same texture all over it. The body remained as it was, also with one single texture. At least the cockpit looks better now [0].

Balance: After scratching my head for about fifteen minutes, I don't see other reason than declare the Tempest as slightly underpowered. Actually all the costs and stats are fine and perfect except the metal drain that should be lowered with about 800. You see, it costs about eight times more than a Mav and having five times the armor. Of course a bit goes away to the hovercraftiness and the extra rocket but still...

My score: Although I dislike the cockpit, I like the rest. I have small editor proggies and will instantly edit the metal stats... Gamefreak, can I keep him? [Later add-on] Actually, I discovered that the AI was completely in love with this guy and tried to build him in millions.