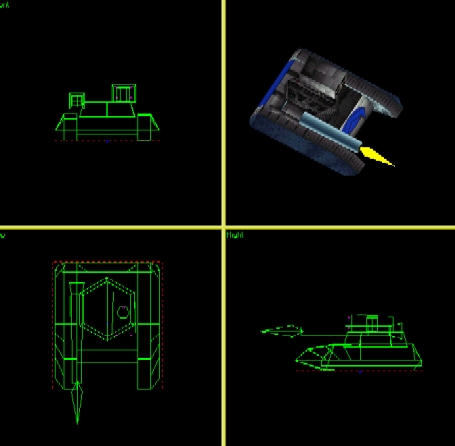 Update: This unit now got a little balance bump, since I was bot a bit stupid and got several backdraws to compencate for the unit's powers and thus I was too cruel when I gave away that score (I know it now, after reading and comparing with some other reviews). Please, Mayhem Inc, accept my apologies. I now bump the total score from 6.6 to 7.7 so it places iteself at the very same place as the Tempest. But, since this unit got better balnce, it naturally comes ahead.

Buildpic: This unit follows the Ogre scheme completely (although I know that the Penguin was first). Same style of unit in water, same background, also too dark. No sight of wakes here either, but that doesn’t lower the score… The only difference is that the penguin is much more low-poly in the render.

Model: It’s main form is a square with a bit removed in front, nothing special with other words. I like the form of the sides, but nothing more. It’s still highly functional form, used mainly by the Flash. The final model score is 2.5, felt like it didn’t deserve any lower. The texxing could be much better. It’s too dark and the team colors are placed badly (not mentioning that they’re too dark too). The missile gun is hard to see from the above-view and the turred could be lighter too, since I only saw it in 3DO, never in the game. 1.5 for texxing is my final score. The tracks on the corpse are ugly texxed and that drags down the corpse score to 0.5. You should also consider making it a bit smaller.

Script: The script was rather good, it’s just a pity that the dark texxing killed so much of the view. The unit get a diffrent corpse wherever it dies on land or over water. well, not another model, but it is passable in water (just like all other shipp wreckage, so other ships can sail over them) and even though the aiming seem simple in the game, it is very complicated in the code. The tracks transforms when the unit gets over water, but still, I don't see enough reasons to give point for the script, since I only give for seen actions, such as walkscript or really fancy fold-in/fold-out animations.

Balance: This is the Morty MK2. For twice the price you get the twice armor, amhibiousity and a small missile. I still beleave that this unit is slightly overpowered but not as much anymore,

My score: Since I am a flash-hater, I disliked the design of this model and also the low detail - high face count settings that you got. Why are the tracks textured on the underside? Lighter textures and team color on the tracks instead of just in front and rear would help up this score. Unfortunately, my first impression was bad and it was not your fault. I will get back to this and change it when I’ve tested it a bit more.