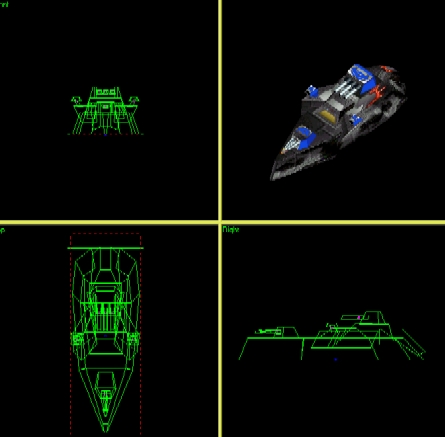 Buildpic: First of all, this unit is the only so far that had it's standard 96x96 bps .pcx unitpic exchanged with a monstrous 310x290 jpeg thing... Veeery strange. Anyway, the picture is unsharp (as usual, I made my own sharp copy, compare here), and too dark. Even though the sun is shining through some kind of mist, It don't seem to me that it is enough to stop the light so much [2]. The background is very cool... [3]. The mix is allright but the sun reflexes in the water just next to the ship break several physic rules about the way the light bends [2].

Model: The sapphire shape of the unit is rather an invention of Arm and not Core, that have very flat fronts. The main cannon is cool and so is the front annihilator (who's cannon design, btw, is a waste of faces) but where are the flares? I see some points but they are there only to fire the actual shots and not to show up as Muzzle Flashes. The missile launchers are also too small and very unnaturally suspended. The face count is kept rather low, but could be even lower [2]. The texturing looks good (they're mainly not OTA, btw) but it could (and should) be lighter almost everywhere [3.5]. The corpse looks like wreck and that's completely fine for me ; ) [1].

Balance: The warlord does for half the costs a total of 273 damage/sec with longer cannon range and slightly shorter laser range. The Shaolin does a total of 376 of damage + 73 for the to-air-only missile. This unit is slightly underpowered... to make up for that, just rise the armor with 500 and you should be fine.

My score: I don't like the design of the unit and I'd prefer to see MT-alike missiles instead of those other fat ones. The d/l size is fat as well, 800+ kb is probably enough to scare away most users. The size is used for the very large unit destruction animation and according sound effect.