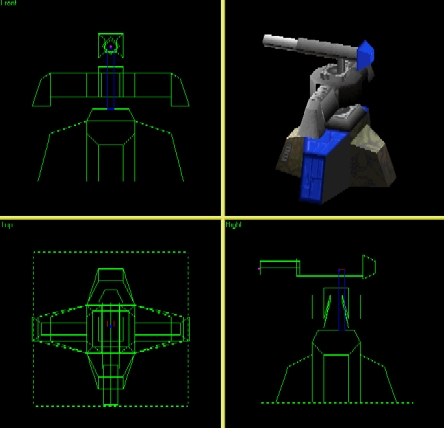 Buildpic: The background is perfect and the merging leaves nothing else to wish for... (and since I've started writing in that way, here comes the inevitable) But (... told ya...), the model is. How to say this... ugly. Somehow, my brain just can't accept it. Yes, it does look pretty descent really, but it kinda makes no sense. It's *gasp* overdetailed! Thus it definitely doesn't fit into OTA. Please don't kill me. Unit 1, Background 3, Merging 3.

Model: The model is leaning in the right way, but not quite yet fully incorporatable into the TA scheme. Make the main hull a lot thicker to make it look more like the standard version and turn the ends of the rotating arms upside-down (and maybe adding the kind of support for the arms too, but that isn't really necessary). The shield might need a walk over too because it looks a bit odd in the game, but I have no concrete suggestion. Otherwise it looks pretty good [2.5]. Same thing for the texturing... it is almost there - you even got the CD:3D right (Storm makes a small joy bounce right where he sits), but not all the way. Check the OTA extractor for more details [4]. The corpse is very good. It's almost a pity that you see extractor corpses so rarely (mainly because no corpses can touch metal patches, but anyway) [1].

Script: Very good scripting in many ways (make sure you read the readme that goes with this file to understand what it can do), but the unfolding of the weapon is waay too slow. By the time this thing can retaliate it is dead.

Balance: Now, to the interesting part. The weapon originally belonged to the Core Light Laser Tower (not that there is any larger difference between the Arm and Core variant, but people like me tend to notice these completely useless things and then make a long, boring rambling about themselves and their kind of people, just like I do right now... err, sorry). The L.L.T. is generally accepted as the worst possible defensive fortification available in the game (which is yet another completely pointless rambling from my side) and err ... I don't know how to end this sentence (you see, what did I tell you). Anyway, the LLT costs 268 M and 2608 E while having a total of 710 armor. A standard extractor costs 50 M and 521 E having quite pathetic 170 armor points. This unit, as far as you can see costs a lot more and so we must find the reasons for it. First of all, just like a solar collector it shuts down and initiates an armored state after the first hit which gives it twice as much armor as normal, but as you might figured out, no metal income. The extractor is also a bit more effective in extracting metal and does slowly regain health over time. However, I don't quite feel that this is enough since the weapon unfolding sequence is so slow that the enemy have time to deconstruct it bult by bult and this makes the unit really weak. Now, this mex isn't available for the commander (a quite wise move, since it doesn't make the AI built them early in game and by that deplete it's recourses) and by the time this unit is available and constructed (due to it's high costs, I assume other things are a larger priority early in the game), there are no longer any threats of small raiding parties around the battlefield while the threat of large raiding parties is sky-high. And while this unit indeed can withstand a couple of Flashes or some Rockos, it can not survive too many of them... especially with the unfolding time. So to get the ten, I'd prefer you to cut down the armor with 150 or so units and make it unfold instantly ... or keep the current sequence and increase the armor with 250 points (before the damagemodifier). And for you people that have a hard time following in my rambles, this unit is slightly underpowered.

My score: Now, this is one of those kinda obsolete units because it is gloriously bad in battle with such high costs and extreme buildtime compared to the standard mex and while it does extract more metal, there follows a cost-consuming weapon function. What would be better was if you created an extractor with the same extracting speed as the standard one and two Missile Tower (or say Samson or something) missiles and of course higher costs to balance it out. That would both protect one from the damned bombing raids and be semi-useful in normal base defence while the costs would be a lot lower (or so I think...). Anyway, I will keep the unit because it is pretty good, despite some minor flaws. And I like the name ... Arm Laser Extractor = Alex... Wheee!!