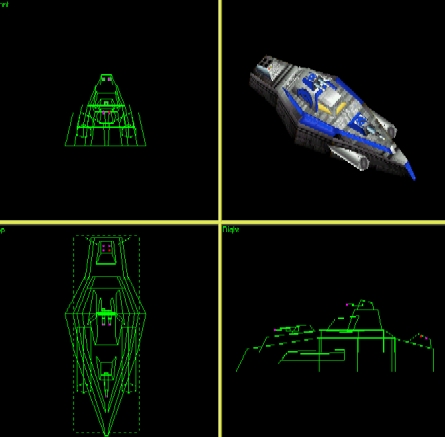 Buildpic: Perfect and flawless buildpic... I never seen such beautiful ship picture before. Wonderful ! There are even wakes (and that is rare, beleive me).

Model: The sapphire shape of the unit is rather an invention of Arm and not Core, that have very flat fronts. The cannons are definitely too small for their power. Please look on the Enforcer and compare. The Arm version got very small cannons, but once again, this is a Core creation, so it doesen't fit. The torpedo launchers don't look good as they point out that way in the front, you should have made some kind of bump on the deck like the OTA ships and launch the torpedoes from there. The missile launcher does also look odd. The double-deck design of ship is nicely created but does not by any means look like any OTA ship ever made. Anyway, a real minimum of faces were invested here and that's a big plus especially when not a single downward facing face shows up and that is really good [1.5]. The texturing is a little odd with much abuse of the logo texture that seem to be everywhere right now. Please remove it from beneath the front cannon, the wall in front of the cockpit and the strange secondary deck in the middle. Due to the Cavedog way to texture (lighter on the left side seen from the front), the torp launchers should not have the same colors. The launcher is also too light (the deck that it sits on is black, but the launcher is light... odd). Besides, the whole thing is pretty messy in-game [3]. The main body have been deformed but since the whole thing have been textured with one texture only, it only gonna be half the score [0.5].

Balance: This guy got the double price of the Enforcer but deals much more damage/second especially against subs with that new torpedo swirling around. This unit got protection against air, subs and other ships at the same time and is therefor superior in many ways. Even if it only got very little armor compared to the costs, I still think that this unit a bit overpowered. I strongly reccomend increasing the costs with about 300 M and the proportional ammount of energy.

My score: I didn't like the model at all, but the pic was amazing. How can you guys make such things?