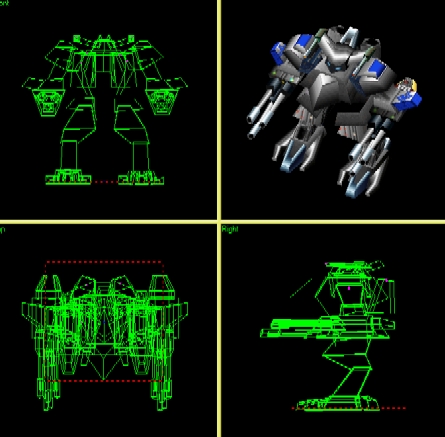 Model: All the face-related issues have been resolved more or less. At least they aren't issues anymore. However, the head still have that same problem with the annihilator lasers being mounted in a supremely ugly way [3.5]. The texturing has improved a lot and not only does it fueature CD:3D, but what most important is, the horrible overpopulation of team color textures have been drastically decimated. Viva la the birth control. It looks really good now [5]. And the corpse has improved as well [1].

Script: The walking looks acceptable, only with a sudden jack on the feet once each step. The recoil is nice, but it is really a shame that the barrel carriers don't rotate so all the barrels takes turn to be the longest ones (being pushed forward, that is). It would really add to the sense of the power of this unit. The shield is magnificent. It sparks from time to time when nothing happens, but when the unit is hit, it lightens up, flashes for a second and then disappear again. Now when the green slugs have been lessened in size the firing sequence looks really damn good because of the interesting flare.

Balance: Comparing the Orcone to the krogoth, we get that the green-blob-gun is absolutely not equal to Krogs' Bullseye-helmet sine the bullseye is both weaker and have shorter range (700 range, 625 d/s). The Orcone laser can not be transformed into Kay's Gauss guns, even with a bit will (300 range and 300 d/s), but both missiles actually seem to be equal because while the Krog's missiles are a whole lot weaker, they can actually hit aircraft and they don't overshoot if the target is within two screens range. However, the last review did not mention that the splash area of these Anthrax (!) rockets is three times larger than the Krog's, meaning that if they hit a crowded area, more units will be damaged. Further on the loop, the Orcone have only 246% of the armor Mr. K posesses. And the best of all... Orcone cost twice as much. This update have seriously bumbed the balance rating of the unit, but my opinions stands that it is underpowered compared to the Krogoth. If under any condition two Krogs meet an Orcone in a fight, they would be widely superior. A krogoth with the target within all the weapon ranges is able to deal out totally 1015 damage units every second. An orcone manages to push only 1322, however on larger distance.

My score: Well, at least it looks fairly well now. It is yet a bit underpowered compared to it's enormous costs.