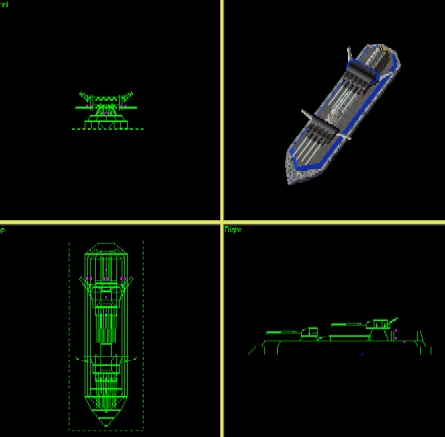 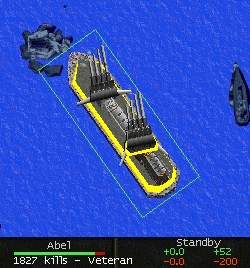 Update: I rounded up the final score in the wrong direction, giving it 9.8 instead of the 9.9 it deserves.

Buildpic: This is a very classy buildpic with nice angle with action aiming.

Model: WTF! where are the useless faces? I give up, gimme a clue where you have them hidden... The model has been completely remodelled in the revision mostly to fit the Cavedog style. The turrets have been enlarged and enabled with those sticky things such ships use to have. The barrels look to be clearly too long, but that is the whole point behind the panic effect. The missile launcher look good and the very annoying bridge section has been removed alltogether. The hull has been modified, as it seems to be, with alt-tab switch between several types of OTA ships and is almost perfect. The difference in this model compared to the previous one is that the nos has been sharpened up. However, it was sharpened up in the wrong way, and no, I'm not saying this because I don't want to give it full score, because in fact I want to give it full score because it is such a great unit. Now, the nose has been made longer, and that face on the very point is therefor also a lot larger and that wasn't really the point. That small face should be just as small as the version on the Millennium and textured with the same texture, a darker one. This is the only flaw on this otherwise magnificent unit [3.5]. The texturing has also been greatly improved (well, considering what I saw in the last version, any change would be to the better) and is so good that even CD:3D shading has been implemented. The missile launcher part has been masterly textured [5]. Haha, the corpse look funny and really damn wrecked [1].

Script: Nice aiming (with recoil this time). The unfolding of the launcher could be faster...

Balance: The decreased damage/second (and slightly decreased range as well) count together with the extreme inaccuracy (and of course the higher costs) makes up for the longer range compared to the Millenium. The missiles have been more or less disabled, as they refuse to react on their own (other than if you scroll the fire orders) unless a plane comes buy and the entire launcher is emptied on all 36 missiles that start to idle in the air, making odd patterns for half a minute and then fall down everywhere, damaging everyone unfortunate enough to stand close, might it be friend or foe. The balance is all okay for me. Let me know if you think that it is unfair in any way.

My score: This unit's description can be condenced in one single word: /Panic/. You see, when you deploy the cannons on a semi-tight enemy base, he will probably get the shock of his life and send every last Skeeter out to get the ground zero of the panic-causing event because unlike other mobile artillery units, this unit really showers the enemy in shells and only people lacking important nerve ends will remain mentally undamaged when a giant spree of highly explosive small things fall down from the sky and damage everything within a screen radius. Never ever have trigger-happiness paid off in such quantities. I know, I will hate myself for this for my entire life, but I will keep this unit... purely for it's panic effect, I assure you. And to all others out there that really love the Vulcan and Buzzaw, but never have the cash and time to build ones... this is the unit for you.

As seen on the screenshot, I had a bit too much fun...