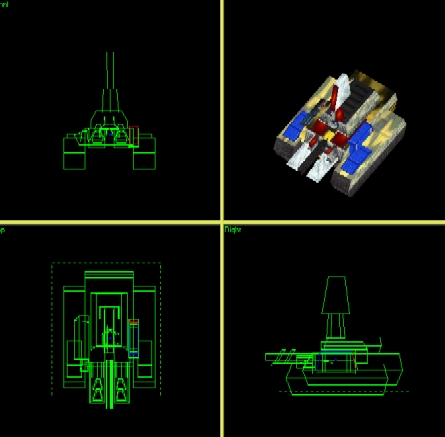 Buildpic: The cannons are a bit messy and the illumination can be questioned. A sky that dark should not be able to emit such powerful light.

Model: Don't be fooled by the 3DO picture because it shows the ultimate standby state of the Hellfire, where both barrels are located on the same place because it fold to it's real standby befor you even notice. The face count is horrifying... long time has gone since I saw so many useless faces compared to the total. As usual, I have textured all the completely useless faces red and uploaded the [ model ]. Of the total ammount of faces on this unit at least half are either never seen or useless in some other way, but the model still look interesting [2]. The texturing is by all means excellent... Yea, it might look a bit odd in the 3DO, but I can assure you that it's pretty descent in-game. The logos are logically placed, but I lack a Cavedog 3D shading [4.5]. But by all means, I suggest that whoever made this unit (-Storm looks in a certain direction-) should work a bit with the corpse, because [ this ] is NOT how a corpse should look [0].

Script: Interesting folding up, but the aiming is a bit flawed... you see, these barrels never aim up or down, so firing at a close target will result in a very odd behaviour of the laser shots.

Balance: WTF! It's eh... balanced... It costs about three times a HLT, but has 2.5 the armor. Due to the high suspension of the weapon, it can easily fire over most corpses but it moves at a murderously slow speed. It's weapon is also a bit weaker... The mobility comes at a price, though, so if you lowered the armor with 300 points (11%), I would be even happier.

My score: Uh, I did hardly expect a balanced unit from the /pre-era/ of the unit making and I love the sounds and the animations. The buildpic is not so ugly and actually packed with a bit of action, unlike many of the /new generation" units. The laser color is hardly disturbing. Aw hell... I'll keep it