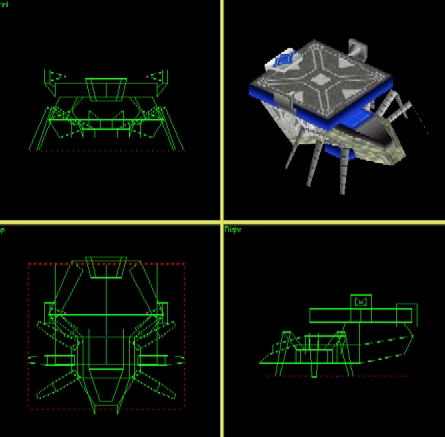 Buildpic: This is one of the most OTA:is buildpics I've seen. The unit is cool, the terrain is good and the alien atmosphere effects in the background are nice. The illumination is perfect and the 3D feeling rules the picture.

Model: Hmm, yeah... first of all, the main body (or the thing that stck out in front) is a bit too fat, looks like it would be more healthy of dropping some weight but get longer legs so the toe to toe distance is still the same. The lower part of the legs should be slightly longer and end up beneath the base, since it looks like the units floats right now. The legs should be slightly longer and the repair pod should be a bit smaller (just 10% less or something) and placed closer to the body thus being placed a bit more to the back (if possible, I see on the BP and heard from K@mi that the original model had the pad more back, but waspushed forward by some reason). And so onto the faces... the main hull got just a few useless ones, like the top of the back body, but the major disaster lies in the nano-beams. Look, I know that the Cavedog made them squarish and ugly, but you can cu the face count in half. For this special duty I've created a mini render that shows the difference and I have even made the .lwo model avaible for those of you who are interested [1.5]. The texturing is rather ok, although, I'd rather seen a bit darker textures on the body parts under the pad [4]. The corpse is fine. Just a snap too dark, it migh look like, but this corpse have actually been worked on for longer than three minutes, unlike others [1]. As a side note to the creators: look on the front legs in the corpse. They hang beneath tha baseplate. That is about as far as I want the legs to hang in the alive model too.

Script: Hmmm, the leg animation looks rather good, but I'd suggest to speed it up a bit more to make it look better and if it possible. Maybe it would look better with eight legs to carry such a weight on the back?

Balance: I would claim that this unit a bit too expencive. It costs about 40% more metal than the stationary repair unit but since the stationary unit's /range/, how I see it is very large, you have to travel very far with your spider to get any planes to land. I don't really understand this thing with ranges for repair pads. The Hive have about the same range of welcoming aircrafts as it's radar coverage, it seems to me, while the statinary one can bring home aircraft from the opposite corner of map in Metal Isles, so if people liked to explain that to me, I would appreciate it. However, I understand that the mobility comes with a price, so the extra energy cost can remain, but I think you should lower the metal costs with around 70 metal units to get a more attractive use.

My score: you might need crawling repair pads in some occasions, so I don't see this unit as useless really, rather as a contribution to the game's supreme variation of units. I will keep this unit, even if I never use it...