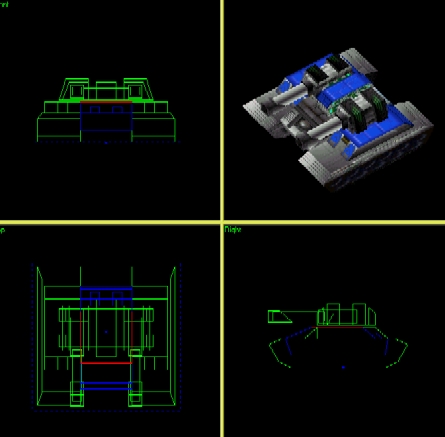 Buildpic: The cannons look a bit messy, but otherwise, it's fine...

Model: This model is extremely squarish. I must admit that I din't expect something like that from the unitmaker league leader. Sure the /torso" and barrels all look allright, but the tracks and the things on the tracks looks so squarish, it's not even funny. Furthermore, I've detected a crapload of useless faces (estimated number: 25) which I as usual colored red and uploaded as a [ 3DO ]. The turret and cannons, however look awsome [3]. The texturing have a bit of the cavedog 3D style I use to require, but it doesen't hold all the way up, since there are way too few shade points right now. Work on the tracks too, the sides of them look awful. The logo texxing has been sligtly abused... [3]. The corpse is excellent (isn't it spelled exellent? My spell check is raging) [1].

Script: The script is very cool and the transformation looks great. Maybe the turret should move back a bit when in long mode? And why is the short mode enabled as the first option when the other one is much better. I think the AI would clearly benefit from having a ranged tank...

Balance: This unit got two weapon, but can only use one of them at a time. The primary weapon (i.e. the one you control) is ripped off the OTA leveler. When in levelr mode, the unit got short range, but a comparative high d/s ratio. When going into long-range mode, the unit transforms to get longer cannons and a long range weapon that does a bit less d/s than the short-range cannon while it loses 900 armor points (33%). I find the short-range mode pretty obsolete, only to be used in situations when you are attacked by big Flash forces (that have short weapon range, as you know) and they manage to get within the first weapon's range. In all other constellations, the long-range owns you all. However, this guy seem to be rather good balanced compared to the Enforcer. It cost 137 metal less, but have doubled energy expences. It also have half the armor (but I think it should have even less... increase the damagemodifier to 1.6). What bothers me a bit is the speed because compared to the Goliath, the Infidel is a top-trimmed racer. Cut the speed a bit (0.8 sounds prudent to me) and you will get the ten.

My score: Doesn't it smell Starcraft over here? Nah, perhaps it's only me... I like the folding and this unit is overall cool when dealing with the long range things, but alas, it's long since I've seen such ugly tracks and the high bill does definitely scare me away. But never fear, you have deserved a soft place in the backup folder where you will be perfectly safe.