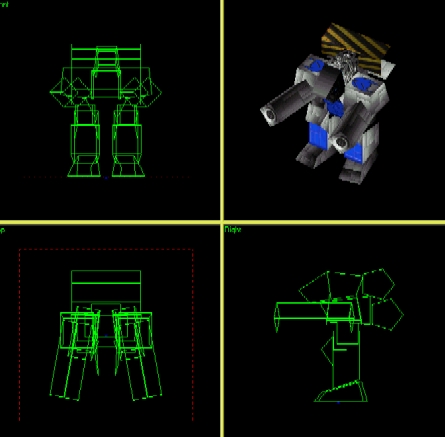 Buildpic: The background and merging of are exellent. The only thing that I don't really like is that the unit looks bit messy. I mean, the left leg looks a bit odd and the head is not really as you will see it in-game. I forgot to add before that the Flare BP needs to be sharpened.

Model: I really like this model. It is somehow both overused and original. It looks good, but it don't really remind me of the Zipper or the PeeWee, for example (although, the legs look like they are directly nicked from the later). The face count is very low and there are no hidden or useless faces anywhere, excepth the four that the pelvis conscists of. I don't really understand why the arms point outwards and the baseplate should be smaller, btw [3.5]. The texturing on the other hand could be a bit better. You have too few light textures and you put them on the wrong places. I took the liberty of retexturing the model and you can both see the results [ here ] and download the model if you're interested [ here ] but until you edit, you're stuck with [3]. The corpse look good, but just like Cadet's corpse, it got a fragment soup that is constructed out of 46 faces (that in my opinion are 30 faces too many), so you can not get the full... [0.5].

Balance: finally, I understood why PeeWees rule AKs... You see, they actually do almost twice as much damage and they are better in every possible consideration. They are faster, they cost less and they have more armor. So basically, in the name of Cavedog, this unit is rather good balanced... 36 more metal and a bit slower speed gives 49 extra armor units (a 11% increase on the PeeWee) and 33% more powerful weapon. If you dropped the damage/shot from 16 to about 14, you would get a full ten.

My score: I like the model, I like it very much, but I'm still a bit against that the Core uses EMG weapons. But this time, I actually end up throwing the AK in the trash bin because of the disappointment. I think I'm off to go play UberHack now...