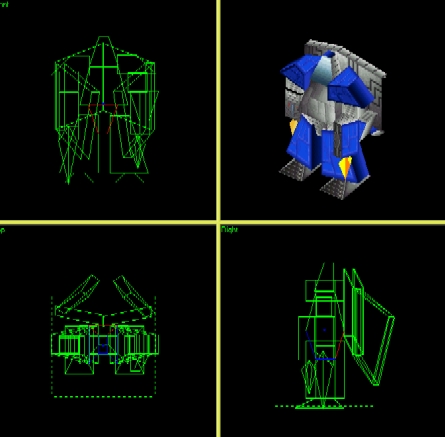 Update: I seem to have miscalculated the score and discovered it only by misstake *boo-sounds from mayhem crowd*. As the Shodan got bumped to 9.0, I wanted to see who of them really were first and discovered that the Archangel actually 8.8... I must have counted with My Score or something o_O

Buildpic: Rather good, but could be much better if you for example let it hover in a relaxing position. I’d also liked to see the light version of the angel (you know… that one that appears when you press on the icon) as the base pic (well, a bit darker then) and maybe another color on the ground than grey, so we could see his feet. More of the wings should be seen. Neway… The background is rather dark and a bit dull, but it looks good. 2 on that.. use a bit more colourful version next time. The angel model is a bit low-poly, but I feel forgiving today and will not count that . As I said, another angle would make it look even better, but 3 isn’t bad either. The unit and background blends perfectly through, you can’t get less than 3 here.

Model: Nice model. Looks terrific to me in 3DO builder, but still so elegant in game. If I would be you, I’d sharpened those inner wings a bit more and make ‘em not so wide as they are now. Also, it would not hurt to giving the inner wings a reversed angle, so they follow the body, because right now, it looks just like flat square that he carry on the back. I know that you haven’t the secondary wings not fully closed on purpose, but please, close them a bit more. They’re hanging unnaturally in the air when folded in. 3 for model is my final judgement… For once, you have managed to make a light and colourful texturing (if you choose a colourful team color that is. Black is not recommended). I like the texxing on this one… you get a 4.5 because it feels like something is missing. The corpse is well done and well textured (except for the legs), so giving less than full point is not an option.

Script: Although this is in many ways a perfect script, it got some minor tweaks. First of all, it has a bit too few coordination points in it walk script (a coordination point in my eyes is a couple of “move … speed

Balance: This is one of the few unit that I have looked upon that is too weak for its costs. I compared with the Anaconda hovercraft that you got the primary weapon from and my opinions got confirmed. For twice the costs of the Anaconda you get an extra missile and high turn rate, but the drawbacks are that you get only around 20% more armor (if flying) and much lower speed (close to half). I think you should lower the costs with about 50-80 metal and appropriate amount of energy for this to be fully correct. But having too weak units are not as big sin as having too powerful and since the difference was very little, the final score will be high.

My score: I don’t care about scores here. This unit has definitely found a place in my patterned heart. Long has gone since I saw such a wonderful unit. The buildpic can take itself in the ass. Those things can be edited easily. All I have to do now is to change the side settings from Arm to Core and I have a friend for life.