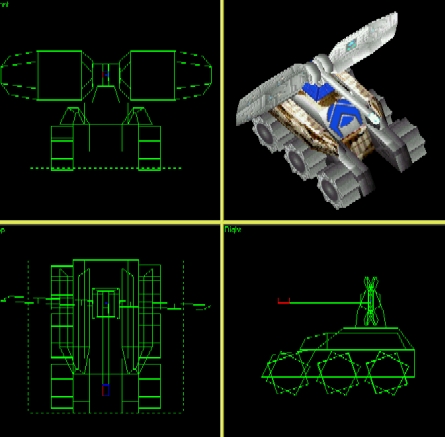 Buildpic: This one is much more diffuse than Mayhem general in my opinion. The angle could be good for the vehicle itself, but in this case, there is a prod with a glowing end that is sticking out and for someone that have not yet seen the model (or unit in-game, whatever now comes first for normal sane people) and it does interfere with one of the radar ears giving a brief effect that the glowing end of the stick is in fact a reflection in the radar. Once you have seen what it is, the whole picture becomes more clear, but it is still too diffuse. Perhaps the angle in which my 3DO screenshot had been better [3]. The background terrain is very good, but I clearly dislike the brown sky, which is shaded in the wrong way. Unfortunately, I can not pull off any score here, since I just discovered that the [ M.A.R.S. ] is equipped with a similar sky, yet it got full point. What is done is done, and don't want to update that review and all the posts of it, just to cut lousy 0.5 points. However, I would deeply appreciate it if you did pic another color than brown or at least had a minor larger elevation in the background, so the sky with the wrong illumination don't come this abruptly. After all, the backgroun in this picture is clearly better than the Mars' [3]. The merging is however lacking this time. You see, the shadings on the vehicle are very sharp, yet the shadow is very weak. The light seem to come from somewhere in front, very hard to say, yet two close textures are black respectively white. The unit don't really seem to stand entirely flat on the ground either... [1.5].

Model: This is a very interesting way that the usual wheel crisis has been solved on. Instead of hexagonal wheels, or almost round variants, as seen in the [ Thor ], this unit got two boxes combined into an octagon. A clean octagon would require many more faces and so this is a textbook face-efficiency, thus with proper texturing evolved into brilliant face-detail combination. There are five faces that could have been avoided, but I don't really feel like arguing aginst them, since the model in whole keeps a very low profile. The groundplate could have been tightened on the x-axis, as seen above and the prod sticking out should either be shortened or removed completely, because I admit that it is very frustrating to see that thing /aim" on everything around it. The stick looks too much like a barrel and seem to hold no purpose at all, since both the ears are facing opposite directions and there is no focus point that comes close to the stick's general position. The radar rotation would look much more symmetric if it was removed and no OTA radar units use focus arms in first place [2.5]. The texturing is very good, not being too flashy, not being too grey, with Cavedog shading and everything. The back side of the radar ears coul dhave been just a bit darker, though [4.5]. Excellent wreckage [1].

Script: The fold/unfold script is nice to see and as far I can tell, the wheels are coordinated with the ground.

Balance: The unit is perfectly balanced with just as high costs for the mobility as one would need. It got too little armor (just as much as it's lesser friend Seer), but compensates that with relatively long radar coverage. However, it is true that the Seer is made more or less obsolete when you can get a much better version if you can spare a Samson's worth in metal. Therefore, I can't unfortunately not give you ten points, even if I want to. But heck, I want Seer in the level 1 plant in first place.

My score: I like it pretty much, except for the ugly prod, of course. But I keep wondering: If this unit really can't fire, why is the attack button enabled in-game?