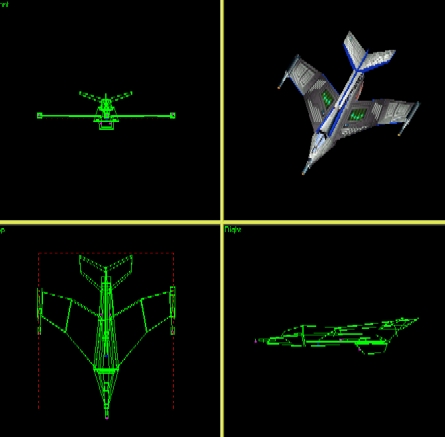 Buildpic: No flaws worthy bitchin' over.

Model: The model, as I saw it first was pretty neat, a closer look however revealed that it is a bit too heavy for it's size. A slight overweight that mostly depended on a dozen or so forgotten faces on the contours of the unit. There is a hardly seen barrel in the front, and a gross pack on the underside and that is wherefrom the weapon shoots (not from the center of the body as it looks like). The shape is clean and the design is completely okay... personally, I might have redone the tail into twin tilted blades " /, but that might be just me. The wings should however be straightened out, for they don't fit the theme [3.5]. The texturing could be improved a whole lot, starting the OTA assimilation project with a snap more plane-alike textures, retagging the underside with the much more Cavedoggish metal plates and then spending the rest of the points on the so desired CD 3D [3.5]. The corpse is lacking, but as before, it is not a problem for a plane [1].

Script: The wings are folded in after the plane lands and the firing sequences look rather dull, since the smoke trails start from the center of the body. There are barrel rolls implemented.

Balance: Now to the Gad (that by the way means /fucking bastard" in Russian) review and closing in to the most interesting part, will the balance hold or not? It costs twice as much as the Vamp, the closest feel-alike plane in the Core vocabulary. For these costs, it got twice as much armor and a slight speed boost, still with me? Now, every time the bloodthirsty fighter runs by it's target, it drops a missile load worth of 136 damage units, while the said air-to-air only fighter very discretely farts a four missile burst loaded with 120 units of damage every time it passes it's ground target. If there is an enemy plane nearby, the Gad roars of fury and tries to get a lock on the target with it's pathetically short-ranged weapons. If it succeeds, the intruder is no more because the weapons aimed for air superioty fighting are very sinister. Let us make an example: A Vamp is thirsty for its victim's blood (alternatively diesel oil or whatever propulsion fluids these planes use nowadays). While hunting it can deal 103 damage/second to it's aggressor, but the Gad in a similar situation pumps various explosives worth 343 d/s. Since it's speed is higher than any OTA plane, any plane foolish enough to piss the Gad off will perish. The conclusion is that as long as you use this plane in pure /HAHA, die solar, die" strategy, it is pretty inefficient, but if the poor solar is guarded by an even poorer Hawk, the usefulness of this plane is instantly accelerated and all purposes are met. However, due to it's high speed, the Gad is much less vulnerable to all kind of attacks against it, being a bit overpowerful. So if you sawed off about 30 d/s from the secondary weapon, you would get your desired ten.

My score: I suppose that this plane has found it's own little /nish" in the TA world... Taking a better model and copy-pasting the stats, would make a unit highly worth downloading.