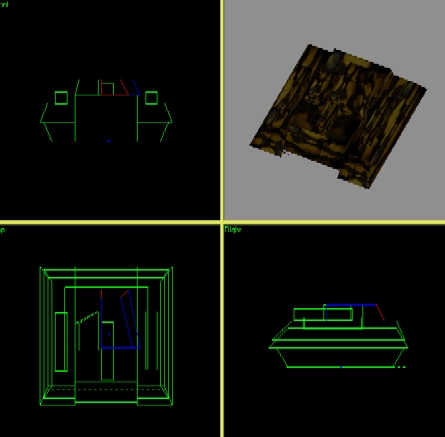 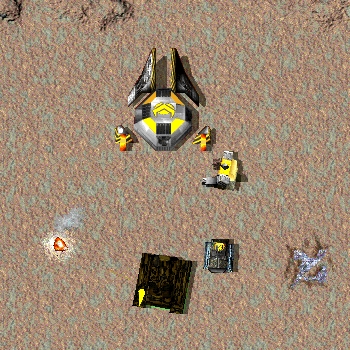 Buildpic: Now who the fcuk leaves the flares on when making a picture first of all? I mean, I've been in the unit downloading, then later creating and now reviewing business for many many years. I've looked through hundreds upon hundreds of unitpics, yet I have never seen someone leave the flares in the buildpic. The unit angle is completely wrecked... well, actually it doesn't matter how you turn the black blob around, it will be a blob anyway but in this specific case, the blob have taken a very specific angle of existence that really, really damage the eyes of the viewer (n this case reviewer). And I don't really know if I should mention anything about the high/low poly when you can't see any specific parts of the unit besides the flares. The unit is also too zoomed out, you get the impression that it is small and neat in-game (which it's not) [0]. There is also the most boring background you can choose... sure it's painted desert and yeah, it got patterns on, but it is so big and so flat, it's not even funny. Please look on the M.A.R.S. buildpic, which I personally found to be one of the best I have in my collection [1]. And finally the completely non-existent merging... I mean why even bother? There are NO shadows and there are NO shades on neither the unit nor the background (the ground shading is not because of illumination) [0].

My score: May I quote the unit description?

"This was the first tank to be made by SI-TECH it holds a Gat laser,commander laser and a llT laser."

Uh, none of the weapons were right: it got two Instigator lasers and one big fat Warlord laser. I mean isn't there some kind of a problem when the creator don't know what weapons the unit got?

This is what I found in the readme:

*Porpose
This is a tank equipt with lasers. It fires the odd Gat gun so deploy it near an ARM base and attack it takes heavy damage but delivers awsome power.....

*Description
The Core Commander decided to come up with severation just after his base was attacked by 50 heavy arm kbots so the engineers at SI - TECH came up with this huge tank the urgent commander took the prototype and deployed it straight away just 1 problem... there was a flaw...The armour was not Titaianium it was just steel the plas were destroyed in a fire so this is it.. lets hope it survives to tell the tale...

Myself, that is known to make a lot of misspellings and grammar mistakes have found over 20 counting misspellings, avoiding of dots and other marks that normal sentences should be equipped with. Then I also more or less fail to see the logic behind the larger parts of the description. "This urgent commander" for example or "The plans were destroyed in a fire". Yeah, I too think that big huge robots, electronic patterns, that Core are still use PAPER after 4000 years of total war. The same counts for both titanium and steel. The way some engineers can develop a massive undefeatable tank just like that does surprise me a lot and the brilliant Core Commander that only after being raided by 50 units comes up with the brilliant idea of making "A tank that can crush - everything - you - can - spell - to - and - your - mother" and by that win the war.

Oh, comean! the creator must have seen this creation in game among the other OTA units avaible and if he isn't completely blind, it really takes much skill to not to spot that the unit both looks and behave brutally different than the other ones around it. What is the major malfunction of the over-kill factor that this unit posesses. I really doubt the someone responsible for the actrocity of creating this unit have ever played as Arm and encountered at least one of these farking tanks at anytime... I mean few defences can withstand it's main weapon and you would brobably be wiped out before you ever knew it. Forget the burning trash bin of hell, for I will disable this unit personally this time !! FOR THE GRACE OF AN IMAGINARY GOD: DEATH TO THE SEVERATION !! LET IT BURN IN HELL !! BBUUUUURRRRNNN !!

As the final moral end of this burning review, I must say this: If you can't make units, we can help you, but don't you dare to officially release a unit that holds no value at all or pimping your site full of incomplete or damaged units. And I beg all you unit makers to gently look through your entire unit before releasing it or you will end up like this:

*Known Bugs
The tank will fire withen range tho the flares still point forward..
if u have any animations for the turrets contact me at --------@msn.com
!!!NO MORE BUGS DETECTED!!!

The last line piss me off.