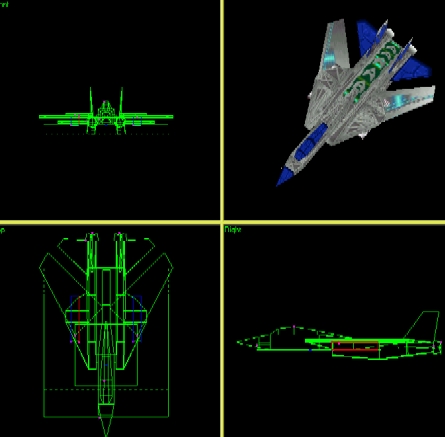 Buildpic: The angle of this unit does make me wonder if this plane isn't out on one of those kamikaze missions. The left wing is rather messy and does disappear into a cloud in the background. There is also a bit suspicious illumination going on. The picture looks sterile - no action implemented [2]. The background could be better if the creator chose a view with the clouds being beneath the camera and not above. This is what fuels the k@mikaze [: P] conspiracy theory as the eye consider the plane being approxim 30 metres off the ground (weel, at least mine does) [1]. The merging is much simplier with arcraft pictures, but this time, I have to cut in the score a bit because of very suspicious illumination [2].

Model: Face crime... pure and simple. This unit is possiblee to remodel with half of the face count (well, the face count itself is acceptable, but the ineffective design is not) and yet it lacks a couple of faces on the underside, making the barrel rolls a bit more suspicious than usual (two holes through the hull). As the whole, it looks like the famous american fighter, yes... [2]. My general opinion when leading the .3do file was plain and simple "Yuck". The same texture is used on at 70% of the unit and the faces wearing it aren't even shattered all over the thing, but gathered on a spot in the middle [Storm's eyes suddenly turns red]. The rest of the textures have the same basic color and so you see a giant grey blob with the contures of a airplane pass by on the screen. If you want a grey plane, then use grey only textures with different shades. That would be much more effective. The logo texxes are for some odd reason dark, all of them without even signs of possible variation. The green arrows on the rear middle part of the unit are so ugly and completely non-fitting, I want to selfdestruct it, and the plant that built it and the con. unit that built the plant and so on and so forth. From a texture view, there is nothing of value in this unit [0]. There is a corpse... but it's the ripped corpse from the Brawler. Thought you were gonna surpass my visuals? Though I only look at the corpse name? Hah ! [0]

Script: No wing flding, ewen landed and still (doesen't these things fold int he wings when parked or is it one of these odd assumptions I use to have?), but fold in when flying fast (just as it should be).

Balance: Okay, the primary weapon alone is enough to class the whole damn unit as unbalanced. You see, the primary weapon have the same damage/second ratio as the Punisher cannon, yet it have the double range while the unit as whole costs much less than the Pun and I'm not even counting the mobility and speed into this or the fact that the missiles are guiding, unlike the fire-and-hope-for-the-best tactics of the artillery station or the fact that the missiles are non turretable and will instatly fire the millisecond the enemy comes in range without bothering with the long and boring aiming procedure. Sure, it's harder to force fire on radar dots, but if you set him on patrol and holding ground one some favourable place and either build a targetting facility or send in a Fink, your problems are pretty much gone. And if you feel good this very day, you can always send in the unit itself to roam above the enemy base because it got more armor than the Pun, actually while costing only 2/3 as much !

My score: One thing that annoys me alot are the extreme lenght on the runs this unit make. You have time to completely rebuild the base while the unit flies by and away in the sunset. I tested the unit on a 15X15 map: attacked a unit in the very bottom of it and left for other business. When I come back, the plane is just by the target, heading north. I press "T" and wait for it to turn so I can supervise the next attack. Imagine my "o_O" face when the unit on it's quest to flight straight forward until the infinity flies out of the top border of the map and is gone there for quite a while. The AI will never be able to use the weapons effectively, since they don't know how to set a unit on patrol outside the range of your defences and the unit will be bent to make 3+ minute runs before it realizes that it's past the target and start heading back.