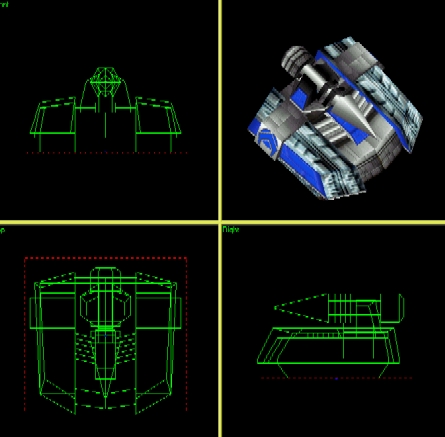 Update: I don't know how, but I messed up the damage/second value of this unit, so the balance got a bit wrong. From being a bit too powerful, it is now a bit too powerless, but since underpowered units are better than overpowered units to me, this guy get a slight balance score bump from 8.5 to a more refreshing 9.5 if no one wanna say anything else. I will let the old balance statements remain as a statue of my stupidity.

Update 2: Well, the balance is actually perfect... I can't do other than apologize to the Mayhem crew. The score bump pushes the Shodan to the very first place.

Buildpic: Oooh, very nice. For once, the laser on the picture contributes with more that it destroys, but it still looks a bit odd [3.5]. The background could not be better... [3]. Something that can be better on the other hand is the merging. The tracks don't show up and if you don't know how this unit really look in the 3DO Builder, you will probably see it hover, because of the strange shadow. The light is otherwise perfect [1.5].

Model: Very nice model here. Impressive concept and cool gun. Of course, everything comes with a price: the face-count. I would suggest that you flattened down those pipes to be single faces measures. How and if you bend them or not, that's not a concern of mine. The tracks are completely useless. I would rather place the body at the same height and actually let it hover around. The green flares got some faces on the underside that are directed upwards. I know that was made on purpose, but you never notice such things in-game unless you got a really low resolution and why does the gun have so many faces on the underside? The things on the sides are reeeally cool and the angles in front are great [4]. The texturing is almost perfect too, with some minor flaws. You shouldn't have used the corship logos on the sides, but rather the dark cammo as the Raider so this unit would blend in much more into the game. The logos are placed perfectly except for the sides, where they should be darker. Very bright settings, as if you actually read some of my reviews [4]. Oh-la-la... this is the first full corpse score I give away for very long time now. Good work, even with such minor details. *applause in background* ; )

Script: The shot frequency was increased from 1 to 4.5 seconds in the scripts and the unit also got a very uncommon flare that I like. Unfortunately, it's highlighted for too long, so If I shoot and then cancel my orders, the flare is there until the unit moves. But it's still a rather simple aim-script in the whole thing, so the script isn't counted anyway.

Balance: This unit does double damage at double range as the Core Raider for approximately 50 % higher metal costs. It might look unfair, but the Shodan got just slightly more than half armor of the Raider and it got only half the speed and less turnrate, making this unit to have almost the same movement settings as the big tanks. But even though it got double energy costs and buildtime, it's still a bit too powerful with that long range. Maybe you could take the Sumo laser as you did for Ogre or lowering the armor a bit more (but pleeease don't raise the costs).

My score: Finally... a level one unit to review and one that is almost balanced too. Whoa... And don't forget that this beauty is Core. Could it be better? : D

And oh... if the unit is officially named Shodan, why is it called /Ravager/ in the game? Ravager sound much cooler, btw.