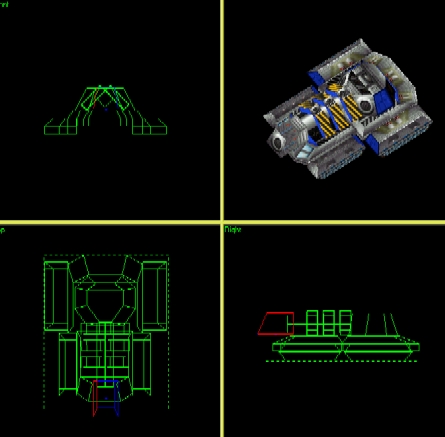 Buildpic: The angle is badly chosen, giving the user a very small hint what this unit is about. The turret aiming looks bad, since it obscures very much while being a box (i.e. way too low poly for being a buildpic) [1]. The background is allright. Too bad, the unit hides it's best parts (the evergreen mountains) while showing the worst (the brown, dirty and boring terrain in front) [2]. The merging is not acceptable. Gluing a black copy of the unit on a background and then the rest of it on the black one to create the shadow effect will not give anyone any specially high scores here. The shadown, the shading of the unit and thre light reflexes on the terrain all talks different launguages [0].

Model: This unit conscists of two parts: The front and the back. The parts don't seem to be made at the same time and due to that, the face effiency isn't really the best with pretty many of those small peskers sitting in angles that could be evaded alltogether (not to mention the standard fault of textures on the sloped sides of the tracks). The barrel is a chapter of it's own, with such an awful face-strategy that my visuals almost popped out and ran away (they were effectively stopped by the thick layer of tape around my head). As seen [ here ], the triangular parts of the piece can be cut to one third and no one will even notice. Further out on the barrel, there is a giant box that is either misplaces or misshaped, since not really fitting anywhere. I might be missing something, but any pyro-technical flame-spewing device I've seen had in fact very small muzzles to make sure that the fuel flies as far as possible under the pressure [1]. The texturing is messy, closing in to awful as the grey blob rolls out from the factory. The pretty much only thing that is distinguisable by it's textures (well, you know that the things on the sides are tracks by the way they are shaped, not colored) is the giant sleeve, that actually looks cool when aiming. The logos have been overabused and the Cavedog 3D is, as always, missing. Yet you have at least tried to variate yourselves in the texturing art [2]. The corpse is a classic Dojo-style. Read the other [ Dojo ] unit reviews to understand why I give this a zero [0].

Balance: Right... (a deep sigh is heard from the depths of the reviewer). A Pyro costs 7.5 times less than the Cremator and compared to the costs, it got twice as much armor while the climbing ability, the speed and turnrate are superior too. The Pyro posesses over a relatively short range flame thrower that (again, comparative to the costs) deals 2.5 more damage than the Cremator does. When taking the extreme weapon inaccuracy of the latter in consideration, I find that the only power of the Cremator - the range - is in fact almost noneexistant. Cut the costs in half and I'll think about if this one is worth other score than null. Then it will probably regain the tactical value that actually resides in it.

My score: One more thing: The sound of the weapon firing might sound ok if it did fire every other second or so, but at this intensity, it is really mind killing. The great flame spree should also be intensifyed because it looks rather thin right now.

Ops, I did it again. How not surprizing.