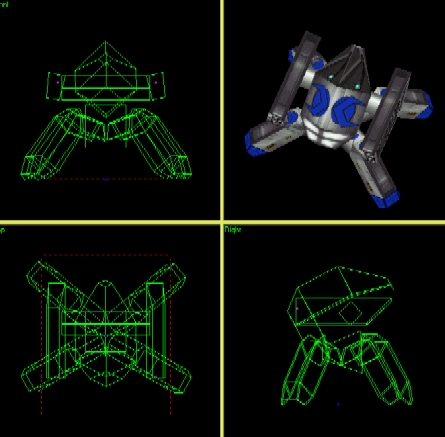 Buildpic: The unit stands in a good angle and seem ready for battle, or just being generally angry at something or someone. It is semi-good shaded with heavy internal illuminational conflicts. The picture also need a lot of the sharpening medication [3]. The background is really freaky ugly. The terrain is flat all over and very boring. Is there anyone besides me that wonders why the horizon on the left side of the unit is higher than on the right? Then we got the very odd sky that for some reason tries to claw out my eyes, so I try to avoid to look at it. The color setting of the background are instantly flamable and should not be dug up from the archive in first place, for they are both just ugly and they keep getting uglier when you put them among OTA buildpics [0]. The merging is almost nonexistant. Hell, there is a shadow, but it seem to be moreof a random darkened spot on the ground than an actual shadow, just study the legs, especially the left one. The light does not in any case come from the right, rather from small flashlights placed out all over the place by papparazzis (which more or less explains the very angry pose of this unit). The sky (oh, god, I had to look at it again) doesn't support any light theory at all since it is almost homogene colored (besides the turbulence formed holes all over) [0]. In my personal opinion, this picture needs to be redone entirely from scratch.

Model:There are rather many useless faces and even more could be removed is the current ineffective leg-design was reduced. There are several faces that obviously face down, but still exist for some reason to my big disappointment (well, I thought that we more or less left this area long ago, or at least I hoped). Important everyone: If you notice that your unit is equipped with unseen faces, just don't bother to texture them and I will be much easier, for an unseen part doesen't bother the engine especially much. As ususal, there is a [ model ] avaible with a lot of red textures all over. To continue with the model itself, the cannons are brutally ugly, maynly because of their square design and way of being suspended but you got yourself at least somewhat original model with rather interesting design [3]. Then we got the texturing... I see no Cavedog style, I see not especially pretty cannons (they got even worse with the current texturing skills) and I see an exclusive core logotype texture abuse. The rear part of the /head" is too dark, all core logos should be removed and those on the head should be exchanged with solid logo colors (that are compatible with the Cavedog shading pattern). The toes on the feet DO look good, but the rest of their textures should be dispatched. I am rather twisted about the lights in the front... you don't really need to change them, but if you did I wouldn't protest at all. The texture score is dark, just as the texturing itself [2]. The corpse is not a usual Dojo-style with a lot of excess faces and it has been pretty good wrecked, but you need to exercise the corpse texturing a bit more, since there is one single different texture/piece and they have hardly been turned to bring you the best of the avaible either [0.5].

Script: The walkscript is flawed quite alot. Instead of moving and turning every legs individually, the four are divided in two pairs. When the front right leg moves, the rear left tag along and since there is no real turning involved, it looks very low-budget. If you want to see a very nice script for a four-legged creature, you should check out the [ Shellshocker ] that got close to perfect walking.

Balance: The Spy/Infiltrator, the only units in OTA that are both stealth and cloakable cost 128 Metal and require quite heavy energy recources to cloak and move (while it's enough with one tenth to supply the Nemesis. I am fully aware that the spies are never used, but my goal is to prevent any 3rd party unit to make an OTA unit obsolete). Anaconda, the serial weapon brother costs as much as 272 Metal and while the Nemesis got pretty little armor (yet more than the Spies), it is impossible to put a weapon worth approxim 200M on a spec unit worth 100M and get away with such low cost as you have. A suggestion is to either bump the costs to about 350M and strangle the speed a bit.

My score: The walking is really ugly and so are the barrels. NEXT !!