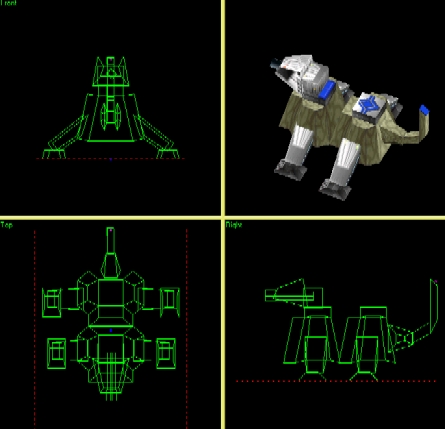 Buildpic: This buildpic is very strange in my opinion. The angle on the unit is well chosen, but I see no shadows. I think the creator is trying to give a feeling that this unit is on a ridge or a plateau above a few mountains and off in the distance is a plain. This would seem believable to me except for the fact that the textures seems all wrong with this one [3]. The textures on the background are very dark and blob like, which sort of reminds me of the Severation. The sky is very nice I must admit, the creator makes is seem like there is about to be a sunrise or the sun is setting. The mountains should be made less jagged to seem more realistic and textures should change. Maybe you could use an Earth like texturing style for the valley, just make sure they are lighter to go with the unit [1.5] These two seem to not go together at all, it's like saying that apples and grenades go together or something. Try and make the background texturing lighter to go with the unit as I said in the previous [0].

Model: This model looks pretty original, but I should point out a few things. There are underside faces on the tail and barrel that have not been removed, please go and check that. The model itself would probably look more doggish if you were to change some areas on the model, those two blocks should be changed to look something like this I'd suggest. Also try and round more places on the model, as NO PART of a dog is perfectly square :p [2]. The logo texture is well placed, but I'm not sure about that box made just for it, unless it has some other function I am not aware of. The team color textures are placed well. The textures are far too repetitive, but since this is supposed to be a dog I shall not be as harsh. I have one suggestion for the head though, change the top head texture so it has something similar to the Fido, where it shows the eyes. Also the CD:3D is done wrong is there is any, please add that in. [2]. One side note, the flare looks nice, keep it ^_^. The corpse looks very fucked up. It seems like textures were just thrown onto it, as most people just don't take the time with the corpses anymore. No points here, redesign the corpse, it looks messed and not in a good way. Also remember CD:3D on it [0].

Script: The tail wagging is done too fast, slow that down. The leg walking animation looks nothing like a normal dogs, slow it down. I wonder why when this unit fires smoke comes out of it's tail O_o. It doesn't looks right to me. You can take this out if you wish, I'm not going to add or subtract points because of it. Another note on the tail wagging, try and make it go side to side, not up and down. If it's already going up and down, try and made it more obvious.

Balance: I'm comparing this unit to the closest thing to it, the Fido. The Killer Dog's weapon is at least EIGHT TIMES more powerful than the Fido's. It costs about twice as much, but that still doesn't make up for the damage. Yes the weapon it's using does have a shorter range, but that even still doesn't make up for this gigantic range. Even with the costs counted in it still does 4x the damage. You can however make 2 Fido's by the time this thing is out of it's factory. This thing is close to the monument...

My score: This unit needs a lot of work no doubt, but it would be nice to have another dog type unit.