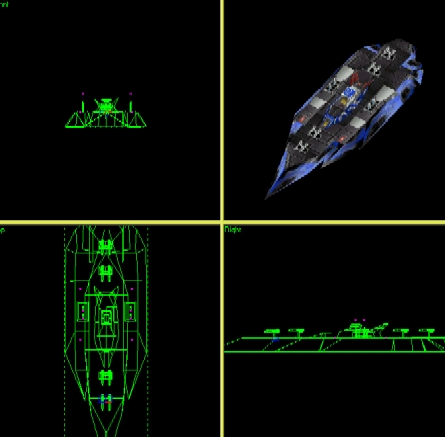 Buildpic: The angle of the unit is a bit flawed and because of it, the way of hanging that water looks rather untrue. I'd also rather seen the unit zoomed in a bit more now when you got a bit space [2]. The background is utterly monotone and reminds me more of the waves in a pool than a shallow sea and even less of a giant ocean. No obstacles figure anywhere [1]. The merging lacks any kind of solar-alike light and seem rahter to be illuminated by a mystic force from beneath the water just in front of the unit than from above. And the fact that this unit don't seem to belong there is bothering me too... [0]

Model: Te basic design of this unit looks rather good, but very alien. The Core do not use sharp edges in the front of their ships and while the extra hulls are technically possible, you have to join them with the main hull in the front or it will look bad. The facecount (how did you guess that I would come to this?) is pretty good for the ship itself as the main dark hull don't have more than 30 faces and the lesser dark, but still too dark "cabin" section got moderate 57 faces. What really is bothering me, on the other hand is the ammount of faces spilled on the launchers and their details. First of all, they are all too small. I could easily have fit everything on a Warlord hull and while placed on a four times bigger ship, they are small and look very fragile. Not as the powerful missiles they are should be. Now, the two small "holes" where the missiles come up from when realoaded are in fact cubes with eight faces, where it would be perfectly enough with two. Furthermore, the place where the missiles hang from got twelve faces, where I see five be very fit. And the worst detail of them all are the missiles themselves that uses up incredible eighteen faces each and still look like small grey sticks in the game. I should also mention that there are six "holes", four missile loaders and blatant 12 missiles that in my opinion over together posessess over 100 useless faces. and everything is small small small, so you your eyes will probably combust while you're searching for all the details on the ship [0]. Now, if you want a ship to look alien in OTA, you could use extremeley dark and depressive textures to convince the user that this ship looks down on the OTA ships (that obviously use the complete wrong camouflage) and spits on them. And if you really really want your ship to be special, make sure you use light neon-blue colors in combination with the depressive black ones on the side of the ship. That is just as good camouflage in the Cavedog universe as bright red jacket for a soldier among normally dressed mates. But then there is a special tactic to make sure the enemy never attacks you: Make sure that your ultimate size-ship's total logo texture area don't exceed a PeeWee's and don't forget to put some of them on the underside too, so you can look there for yourself to ensure that the ship is yours while the opponent thinks that it's his ship and don't touch it [0]. And there is an interesting aspect about the texturing of the corpse too. You see since I have whined about the corpse being texxed in the same texture, the creator of this unit got an exellent idea: I don't texture it and therefore, Storm can't whine about it. Unfortunately, I am not that stupid [0].

Script: The reloading script here actually needs a mention and a score because it does at least look complicated. There are four "towers" for one of the weapon. Each of the towers hold two missiles and when a target come close, they fire the missiles one by one and when one tower got emtyed, it goes in neutral position and two new rockets slides up. It's hard to descrive, but it looks very good and is an exellent job. Futhermore, there are four VTO (Vertical Take Off) missiles that lauches and reloads in a nice way. What you, in my opinion lack is some kind of small radar that rotates.

Balance: The rockets that this ship uses are indeed very powerful, but there is a problem: They are innacurare and they tend to hit the waterin front of the enemy so if you want to hit and by hit, I mean hit and not splash damage, you need to come closer than half the missile range and that partly kills most of the power. I tried this Ship on GoW and it was completely useless for aiming on units on land (or units in first place). At one occasion a small small hovercraft puffed by the big ship at a range of about 300 points (that's something between 1.2 to 1.5 Razor Kiss lenght) and the big bastard could not destroy more than half of it's armor, which is equal to about 120 damage points. Should I also mention that an encounter with this ship and two adjacent torpedo launchers ended up with this ship losing half of it's healts (it needed to come to point blank range to be able to fire at them). Now, if we count with the Warlord's laser only, we get following results: The range is 810, about the same as for the missiles if you want to hit your target. The damage/second ratio is 163 and if you consider that the Warlord is four times cheaper, this weapon only is superior to the Razors's Kiss and considering armor/metal unit, the Warlord got twice as much armor too. This units renders itself obsolete faster than you even can test it. It can seem prudent to claim that this unit's speed and turnrate make it more balanced, but that is just nuts because ships of this size should not be able to go that fast and if they do, they should certainly not be able to turn that fast.

My score: I mean why does people need to go for bigger and bigger units all the time? I mean, wasn't the Shaolin enough in size, so you HAD to make an even bigger ship with even larger costs? How long time will it take for people to realize that it is the level one units that rule the boards? Look at the Vanguard for example... It got no impressive size, nor impressive costs, but it still looks good and there is actually a chance that I will build that unit to aid my fleet. I can guarantee: No one in sane mind that struggles to win a game builds super units. That is a simple fact that many many people around the world refuse to accept. Thus the giant download of 800Kb was in vain since the big explosion .gaf was never used. The ship was said to disintegrate in a huge boom when destroyed, but alas, it went *pluff* next to several tidals and they didn't even get a slightest health decrease.