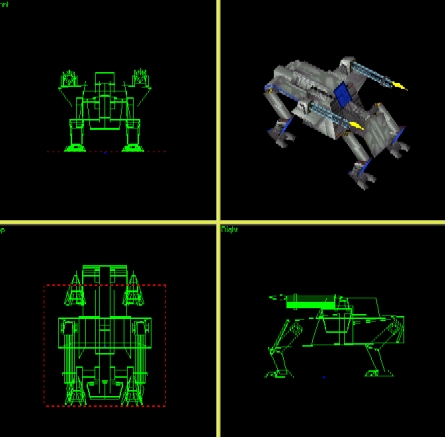 Buildpic: The picture is a bit corny and the unit is in a good angle and looks rather allright. The rear parts of the body are fuzzy and unclear so you have to stare for a while to see how this unit ends [2.5]. The background could be much more interesting (not just plains in same color) and less corny, but this is allright [1.5]. The shading is good and I see no traces of missdirected lightspots anywhere [2.5].

Model: The concept has plenty of imagination but is very poorly designed. The creator has done quite a big effort to add much details to the unit and the different parts looks rather good, but unfortunately, somehow, they ruin everything for each other when seen as a whole unit. The previously mentioned details are added for a high face prise. Much is useless or could easily be more efficient (better details with fewer faces) with minor changes. This, in compare, small model got almost 300 faces and that is even more than the Razorback counted in face/volume-size. The model is also extremely squarish with sharp edges everywhere (but I have seen worse, trust me). Final model score is heartbreaking 0 of 4. The texturing is as the details very intelligent when looking at small pieces of the unit, but as a whole it looks awful. When playing in-game I just see a grey box (such as refrigerators or computer screens are transported in - but grey) with four legs and two machineguns move around (certainly not a refrigerator box). Unintelligent way of shading and bad logo-placing throws this score down to 1. Finally, the corpse... No, I won't even consider other option than the lowest possible mark: 0. A bit of work have been made to bend some legs and machineguns, then, without removing any useless faces except the flares, the creator colored the whole corpse with one texture.

Script: The walkscript looks very ugly but it is because of the model, not the script. On the other hand, the machineguns turn right through the back of the unit and sometimes each other too just like machine guns shouldn't do. The aiming script is poor and I can think of several enchancements to make the barrels to turn only to one side. Major bug...

Balance: This one is not balanced, that's for sure... As a warming up, the unit got 20 % more armor than the Fido for about 2.5 % higher metal costs. Well, the major part is that this unit does almost six times more damage as Fido for the same bloody costs. I don't need any explanation of this unit's backdraws to outweigh the enormous damage it does simply because there are no backdraws. In worst case, stats have been kept as they were (the buildtime is exactly the same both for Fido and Beagle) but mostly increased and improved at a cost of 14 extra metal units. Isn't that unbalanced? Hell yes!

My score: I stick to the Fido