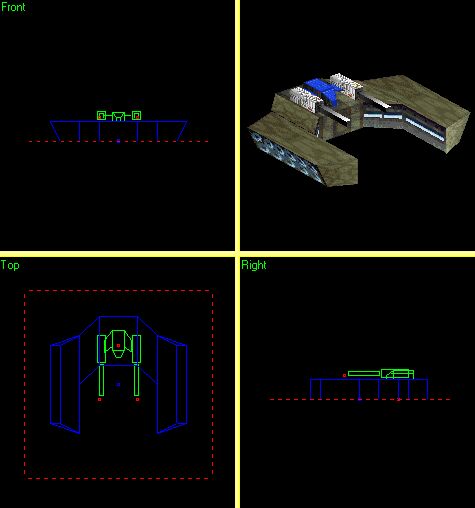 Buildpic: There are two ways of sunmming this up. There's ugly, and then there's ugly. The better of the two evils is the 96X96 Buildpic, as you see above, which even shows a hint of creative effort, including detail, a very attractive action pase, and a shadow. The actual BP in game (shown here), is a horribly turned, badly angled, lack of detailed, lack of shadow, and weird-look strange contraption that seems like it was a demented brown-slug colored magnet, with a little thing that looks like to me to be a radio antenna [0]. The background looks more like a distorted set of pixels, and is totally void of detail [0.5]. Merging? What merging? [0]. This would be much better if you used the angle used in the PCX version. It would still score low (about 4), but the angle looks really good.

Model: Don't let the 3DO pic in the review fool you; this thing's butt ugly in game. The sleekness does NOT show in the game. In game it looks like a weird-shaped U, with a teeny weeny turret, which through close inspection actually MATCHES the original Flash turret, except some texturing changes. Because of that I have to give the unit a zero. The unit needs a redesign desperately. If you want to keep the U, then change the turret into something bigger, and fills the space. I like the idea, but not how it was initiated [0]. The texturing is so ugly that it makes the Celebrity's worst dressed look pretty. The textures are repeated over, and over, and over... No cavedog 3D implimented, and the turret is rather simply textured, that doesn't look quite right. Too few logo textures [0.5]. The corpse is totally weird. A third of it is lamely textured (left side), the middle is not even wreckage-textured (uh-oh), and the right hand side has a really nice texture for it. Unfortunately, I'm not giving a point for one good looking face. The turret is totally missing, with no sign that it actually EXISTED there, and there is no chassis disfiguration whatsoever [0].

Script: Standard Aiming. However, a big problem; flare animations! You've got the pieces, but you're lacking the show, and hide functions (and the wait in between them)! Fix it, or Script: Not Counted

Balance: Okay, let me get this straight. The Flash costs 870 energy, and 106 metal, having an E.M.G. weapon, and has 625 armor. The Flashbang costs 150% more metal, about 40% more energy, uses the same weapon, has amphibious talents, moves slower, and has a little bit more armor. Now looking at these stats, I have to say it's about ! Yes, probably shocked you there. I mean for slightly more armor, and same weapons, for twice the resource cost, while adding the amphibious ability, which is invaluble, because only subs can hit it, and cannot be detected without sonar. In a non-water map, this unit's underbalanced, but in a map with water, this unit's fine. However, I think this unit makes the Flash obsolete, so I strongly recommend moving it to level two. I'm giving it an ten against my better judgement, but I need to check to see if this is the right score, and I plan to change this score when I figure it out.

My score: How about that. A unit that sucks in every category, but somehow catches up with a decent balance score. If you guys change the buildpic and model, you never know how high you can score here. I can't wait for the next revision. Oh, and change the turret! I hate having to dock off your unit model score for that. It would of been a two otherwise. I understand that Skyliner had this reviewed queued without his permission, but I think this review will help him make the necesary changes to make this unit truely shine.