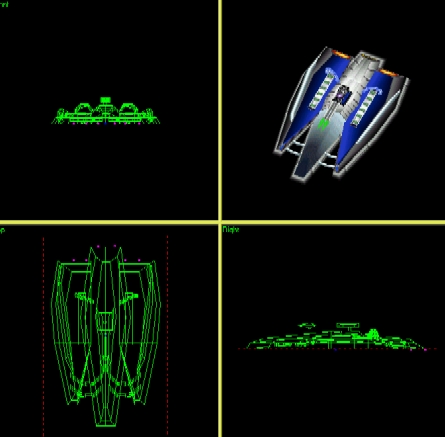 Buildpic: The angle is nice, but the green laser simply ruins everything. To get a better score here, remove the laser and lower the view so the unit  is mainly in the lower half of the pic and not the upper half as now [1]. The background is very boring, with one small reflection of something else in background, so no high scores here [1]. The mixing is not especially good either because there are no kind of reflections anywhere of either the laser or the ship and the water gets darker, the closer it gets, but the unit is still unaffected and that green spot don't neutralize everything [1]

Model: First of all, the face count is huuuge... 250 faces for such a small unit and that is by my marks enough to get a really low score. Most of the faces are spent on some kind of fuel pipes that are constructed with extreme poly-count. An awful lot is also created in the many bendings structure. As always, there are just too many faces that are never seen in game, such as the pipes and the turret. The cannon is wrong size in comparison to the rest of the body. Would you mount a handgun on a cruiser as the only weapon? The basic design could be nice if you didn't mess it up so much [0.5]. The texturing is very good, far better than the model. The only think I dislike is the bright corner around the dark cockpit and on the sides [4]. You might not have noticed it, but many of the textures on the corpse are missing and the total figure looks very bad, due to texturing with one single face on one side and another, darker on the other [0].

Script: Standard wakes and animation. The turret is moving irritatingly slow, causing frustration in the front lines, since any enforcer can with some micromanagement outmaneuver it. Just... not fun.

Balance: Um, this sucks... It got more than double damage/sec rate than the Enforcer (at 30% shorter range) but for lower costs. Make an own weapon instead...

My score: Damn I hate the over-exploitation of HLT lasers. There don't seem to be any larger unit group that don't have a unit with a HLT weapon. You use a weapon ID, but so what? The face count is horrible too...