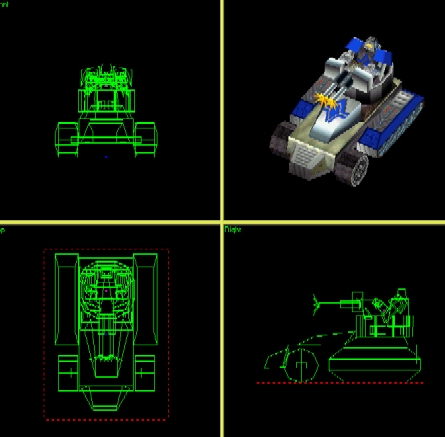 Re-revision: Read the complete review of the older version here.

Model: The model hasn't been changed at all as far as I can see and I advice downloading [ this ] file again and remove all faces colored red.. To kill even more faces on the arms and barrels, you could turn them 45 degrees and then delete the excess face. In the end, the score remains where it were [3]. The texturing have been slightly improved, but now there is a problem caused of excessive abuse of team color textures. My model shows one way to reduce it [4.5]. The corpse have been slightly retextured and even though I require much more diversion (and lesser overabuse of the first corpse texture on the list) and removal of unseen faces, I give you half point, just for the sake of it (note, you won't get another /just for the sake of it" score bump, just so you know) [0.5].

Balance: The balance now seems to be pretty fair. This unit cost more than the Core Goliath but does just as much damage/second on the same range by default. However, when fighting level 1 ground units (not stationary stuff, only kbots and vehicles), it does a bit more than twice d/s. This brings an interesting strategic addition to the game because seeing that most armies consist of hardly less than 50% level 1 stuff and this unit is more than suitable for encountering these armies while it is more or less bad against structures and defences in general (well, not really bad, but ineffective compared to the price tag). However, I feel that the default damage is slightly overdone. If it could be lowed to 120 d/s, it would be perfect.

My score: I don't care if the unit got many faces, It's hilarious. All the names and explanations /riot gun/, /trigger happy kbot" make me chuckle. It is a fun unit, just a pity that it's a bit unbalanced. Nice firing sound too. I forgot to mention that in my last review. And now it's balanced too!