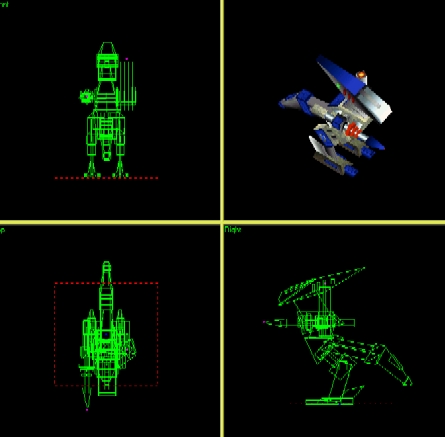 Buildpic: The unit looks much smaller than it really is and looks very fragile. It suddenly comes to me the reason to this thought the legs are so small and tiny that the unit seem to fall flat forward any second for 50% of the body, as it seems on the picture is placed in front of the legs, exactly where 50% of the body mass should not be. There is a laser on the picture, but I am highly uncertain if that is a beam that comes from that stick mounted on one of the sides of the unit or if it's its fluffy blind stick that it holds in front of itself to prod some other blind Kengu nearby [0]. The background is impressive [3]. The merging is flawed since the beam doesn't cast any alternated shadow and since the existing shadow somehow fails to convince the eye that the right leg of the unit is standing on the ground and not just copy-pasted there. The shading on the unit is awful and really kills whatever impression one might had before [0].

Model: Face crime, DELUX !! There is a brutal, overreacted, completely useless bunch of pipes and leads and boxes and squares and various pointy things in every damn corner corner of the damn unit and what worse is, most of them are textured on the underside. Such atrocity I did not expect, but a quick check on other SD-units in my realms only revealed that this one follows on the same line and by my own opinion should be taken out and shot as soon as this session is completed. The 300 faces spent on this model could just as like be 50 and this grim face I have could just as like be less raging. As for the design, it looks not what it is supposed to be. The construction of a kangaroo is big fat legs for massive power output and a long, thick tail to balance the torso (that is logically thrusted forward under a jump). What I see here, is an oversized head section that alone would destroy this unit if it fell forward by it's own weight (which it probably do every five minutes when parked, let alone moving). Compared to humans it looks like a 21" screen above the shoulders (and if that isn't too big, then you're either a fetish or alien or both). Further, I see a tail that is oversized by the head alone, legs that together are smaller than the tail, just waiting to charge another 10 inches forward. Yeah, this looks like a bus full of kangaroos crossbred with potatoes crashed into one of Suzuki's factories and this was the only survivor. Do I also have to mention that by the size of the barrels and laser guns on this units people should be able to fire off panzer rockets through ordinary straws [0]. The texturing is awful, just plain awful and a painful to look upon for it lacks variety as nothing before. Yes, I know that the unit is pretty good variated on the underside but that side of all sides is not to be textured, no matter how beautifully you do it. The top side is the only thing that counts and from that view I only manage to distinguish the gray color and a massive amount of logo textures that looks so bad, I want to shut down the screen and carry out some dishes and cleaning my room. I don't want to talk about CD:3D because the overabuse of the logos give me the creeps and a neural damage so hard that I think it will delay the next review [0]. This unit uses the very... matching... Zipper corpse instead of one that looks like a kangaroo. I don't want to see a fallen warrior on the ground, I want to see that head lying down next to the body and being generally dead [0].

Script: The script is said to be jumping and yes, the body moves up and down a bit as it seems, but what the feet do, I can not explain to you, it must be seen by own eyes. The just jingle, they can impossible get the massive head so high up in the air by the small movement made. Now look on your feet. Not on your legs, stupid, on your feet. Move the feet as fast as you can up and down. Now stand up and jump as high as you can by using your feet only. If you manage to get higher than 2 centimeters (a bit less than an inch or thumb or whatever measuring you got there overseas) without cheating, you deserve a medal for extreme muscles. Now, this is exactly the procedure that the Kengu does, only it jumps 2 meters up in the air. I suppose the manufacturers just shut off the leg-jump subfunction because it happened under experiments that the unit jumped too high and accidentally crashed with a plane or satellite. It feels horribly deep in my circuits when I see this unit move over my screen with the jerky movements that look more like masturbation than jumping.

Balance: Let me be brief: A flash costs half as much as this unit, yet it does just as much damage/second and just as much armor on a bit shorter range (180). Underpowerful, cut the costs.

My score: Yuck is my only expression after testing this unit. I think I'll go take myself a shower and burn my clothes.