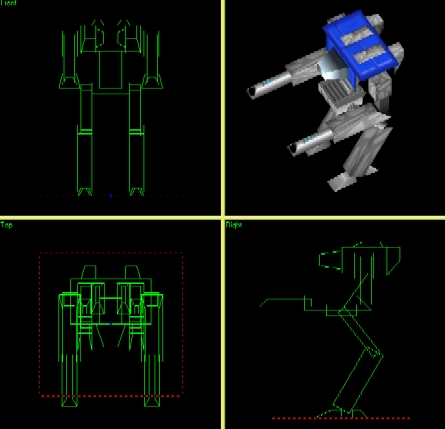 Buildpic: The angle of this unit is nice and gives a feeling that the unit has some size and the lifted leg makes it look like it's actually doing something other than just posing for a photo. It looks as if the unit is watching maybe an enemy base or something. The darkness of the unit however makes the faces blend together, especially the legs. It should be sharpened [2]. The backround is a cracked desert with some hills that in my opinion is a little to pointy and hilly to be in that kind of landscape. Especially the one under the left barrel. The sky is blue and clear with a cloud that is hidden behind the unit and makes the unit look like it's glowing or emitting steam. Move this to one of the edges or remove it as the steam engines became obsolete already during our time [1]. The unit shadow is seen behind the unit and that suggests that she sun should be in front but the front of the picture is dark and I don't like this so please lighten up And the left cannon is shining but only the upper part while the right one is completely dark. Fix now [1]. Oops I nearly forgot the disturbing Omega design text when you click on it, remove this too.

Model: The model doesn't have any useless faces and the whole facecount is acceptable However some parts could be remodeled with less faces like the cannons and the foot wich is divided into two parts right now. The size is good but the plate between the legs and the upper body looks weird in game [3]. The arms and legs are are textured in rockcamo and make it look like an arm unit. There is only two logo textures but as one of them actually covers near half the unit in game this is a clear overabuse. CD:3D is seen clearly if you look from the sides in 3DO builder but in game it's only seen on the barrels [3]. The corpse looks fine [1].

Script: After playing with this unit in game I thought, cool a k-bot on rollerskates. I mean look at how this guy is moving, he's clearly skating. The legs moves forth and back and stays in extended position for a while and then then shifts again not caring the least about the ground speed. He even vaves the arms like he's skating. But when I looked at the model I was a little dissapointed as couldn't find any wheels. Yes he aims normally

Balance: I'll be comparing this unit with one of my favourite units, the Maverick. First this unit costs 2.5k more energy than the mav, around 22% more and costs 753 more metal equaling around an increase of 250%. Looking at these stats we see that it should be twice as good as the maverick so let's see. The opressor is a little faster but with less turnrate and has more than twice the armor, so long looking good. Now let's look at the weapons. This unit spews out good damage, in fact 220 d/s but the maverick is a good tad better with it's 400 and it has 20 more range too plus it doesn't cost 90 energy/second. So This unit is underpowered. To balance it you could lower the costs to near maverick level or increase the armor and weapon by 40-50%.

My score: If it had been a skating k-bot and looked good I would have loved it but as it just is an underpowered, dark, bad scripted maverick wannabe with an unclear buildpic I do not. Shift+Delete (I don't want this one in the recycle bin).