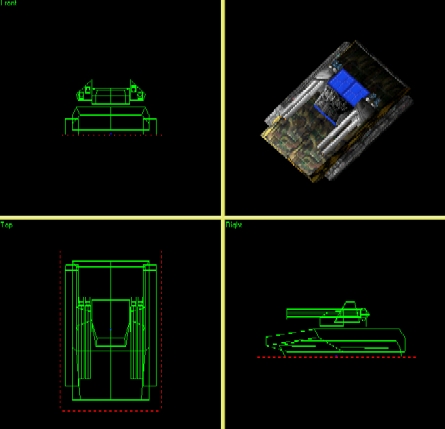 Buildpic: The picture smells action, it smells battle. The unit is in a good angle and with nice aiming effect, but the barrels are a bit messy. They don't really look round and their color blends with the rest of the pic in several places [3.5]. The background is very good, but with two flaws. Number one is the small snap of blue in the top left section that somehow utterly destroys the realism of the picture. It can't be water and it don't look like sky, so when seeing it, you understand that this is a render where the camera is a bit misplaced. Take your thumb or any finger of your choice (or an object if you are really pecky) and cover that little blue stripe. The picture instantly seem to make sense. The perspective changes all of a sudden and the picture looks much more realistic. The other thing is that the shade of yellow used on this presumably sand lands is exactly wrong. I can't put a finger on it (well, theoretically, I can... but I won't see the picture then), but it looks completely off-hand [1]. The merging is very good besides the fact that while the ground is bright as hell and a very sharp shadow says that the light-source is a very strong one, the unit itself seem to be completely unaware of it and being utterly dark anyway. I mean even death-black objects look brighter when illuminated by a light this strong. And parts of the unit are misshaded anyway [1.5].

Model: The model has improved in several sectors... The very useless turret neck is dead and buried, the barrels look a lot better and the previously featured, but unused laser has been removed - kudos. Yet, technically, there is much work left to do. For example destroying one of the twin-sections the body consist of (unless you want to raise the parts in the middle) or exchanging both tracks with one single, but very wide track. Since this unit is so expensive, it should clearly look more tough, more bold. The main body need to be more rounded up, the new barrel holders need to be adjusted so they fit in with the with of the top faces on the unit. The turret itself should be more rounded up on the sides (and it should lose some with as well while you are at it) and the front middle section should be thrusted forward a bit for the looks. Sharpen up in front of the body [2.5]. The texturing has been greatly improved as well with more variated textures and it does even fully feature CD:3D. However, as a drawback, the unit is way too dark and my suggestion in this area is to go through the main body again and chose the snap lighter texture for everything. The logos are sufficient [3]. The corpse is same as last time... [0.5]

Balance: This unit cost almost twice as much as the Core Goliath, 1270 to 697 metal. It got a bit more than one third armor 1100 to 2845 and it does just a bit more damage/second (160 to 131). However it is twice as fast (2.0 to 0.8) and it got this tremendous range - 2.5 times longer than the Goliath. This seem quite overpowerful to me, as range is very, very valuable (the main difference between a LLT and HLT - Gaat gun or Sentinel - is that the HLT got 25% longer range while being just a snap more powerful for twice the price). With current stats, the range should be more like 650. Losing the speed below 1.0 would probably boost the possible range to 700, but you have still to remember that this unit shoots 4 shots per second and therefore having a much higher damage capability than the Punisher. As a reference, you should read the Shellshocker review.

My score: I will not allow a unit with the same range as a Punisher and even higher damage/second roam around freely for 30% lower costs. It's an outrage... And when I think about the fact that this unit was even more powerful last time I saw it... *burr*