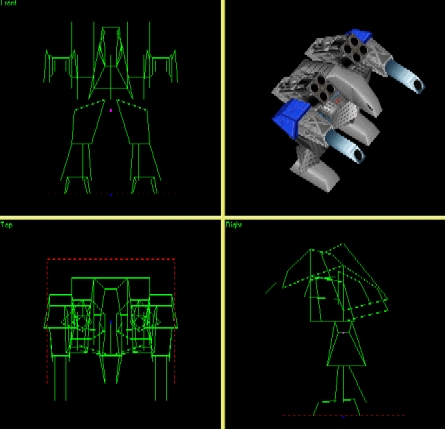 Buildpic: The unit is first of all very messy with many details somehow blending in with other details creating a very fuzzy feeling. The picture is also unsharp on the great whole [1]. The background is poorly chosen as it has more or less the same color as the unit and also because it lacks any kind of features [1]. The merging is fairly acceptable with proper shading and shadow on the unit [3].

Model: The model reminds me a lot of the basic design of an A.K. (and that might be the whole point too). The face count is low and the design is generally acceptable, although it wouldn't hurt to have the top view a bit rounded up and the model sized down to 80%. The chest should be remodelled. The missiles don't need any flares [2.5]. The texturing is nice, although a bit too repetitive, mainly because all the textures are just different shades of grey in the game. The CD:3D exists, but the head should be far more metallic (as the original A.K.) and the barrels should clearly have normal texturing [3]. Coloring the whole corpse with the same texture has never been acceptable [0].

Script: I must admit that I was hugely disappointed when I saw that the arms were permanently stuck in forward up position, just like the lil' bro A.K. I must admit that I have expected better movement for a unit this large and this advanced. Just check out the Maverick in the same plant... The walking is also just moving of the legs, without any sign of moving if watching the torso through the movement sequence. The animation of the legs if fine, it's just the lack of animation of other parts that lowers this score. Also, the cannon can not reach it's maximum range because the weapon velocity is set too low..

Balance: The Arm Maverick that can be found in the very same Adv. Kbot Lab as the MAD Kbot costs 2.5 times more metal and 4.7 times more energy, yet have less armor (only 870 compared to 990), less speed (1.4 against 1.9) and having a generally weaker weapon. The Mav weapon output is 400 sharp on a range of 340 while the MAD kbot does 390 damage/second on a range of 360, for less than half the costs. Thus it has a secondary weapon with a very very long range and 35 d/s extra bonus. Also, I must remind you again that since this unit is costs 2.5 times less than the Mav, it's armor and d/s are multiplied by the same factor, bringing the armor to be three times better and the total d/s to 1062.5 units! It is an outrage! However, since this unit is flawed and can't shoot at maximum range with it's cannon, the overpowerful image is toned down a bit. The unit get one in the balance instead of the much more deserving "0-". Can you imagine how close you were to the monument?

My score: Just another unit that brings zero diversion value into the game. What is it supposed to perform when it already got a unit next to it that does exactly the same thing? Pathetic.