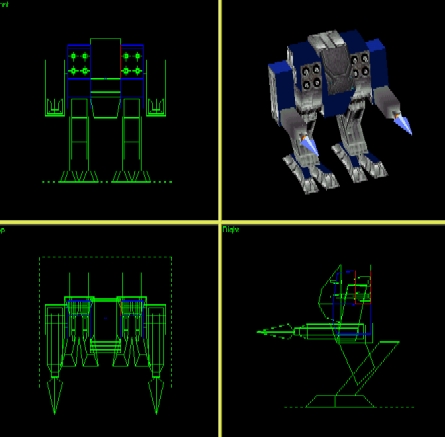 Buildpic: The Angle is nice but the pic is very fuzzy, sharpen it as soon as you can. Compare the difference here [3]. The background is very good [3] but the merging is not perfect. You see, the shadow of the unit say one thing and the shadows of the mountains in the background have another statement. The shading of the unit is otherwise fine [2].

Model: This one is veeery squarish and full of useless faces (just like all Raptor-alike mechs I seen this far except the Raptor itself, actually). Many faces have not been removed, but the most shit this time is the missiles that takes 18 faces each... all eight of them. And all you see is just the top of the head, so you could easily edit the face count to just two faces/missile. The model is also very squarish, having sharp edges everywhere [1.5]. The texturing has one really major problem: It completely lacks logo texturing and will come out blue colored whoever builds it. It looks just natural in the 3DO Builder, but if you look closer, whoever made this just applied two of the 256 colors that looked like the logo shades. This unit deserves zero as texxing score just because of that, but the creator seem to have spent much care on the rest of the unit, so it would be cruel by me to give such a score. But as some people, this guy tends to texture lighter, the closer to the ground the unit gets. Unfortunately, there is no 3D shading on this unit either (3D shading is that you tend to use lighter textures on the left side than the right seen from the front, just like all OTA units are)... Long ago, I noticed that on a 3rd party unit [1.5].  And finally the corpse... all my last five reviewed units got zero in the corpse, but finally, there is some soul that cares at least a little about it. The author did not really remove all unnecessarry faces, but still tried to texture different parts with different colors, but it's still not enough to get a full score, sorry.... [0.5]

Script: Although this unit have knee joints, it don't look like it is using them because the legs just pendle back and forth. When I looked in the .3do file, I discovered to my horror that the legs are actually set forever to not to have knee joints and doomed to get an ugly walk script. Anyway, when the unit stops, it continue to walk one step extra alhough it stands still. That is probably because of the bmoving and the motion control tags, so I can't really blame you for keeping track of the unit's actions. But somehow... the others seem to have figured out a solution.

Balance: While having a third of Mr. Krog's costs this unit should have about 20% of its firepower. Let us see... Krog-Annihilator... range 700, d/s 625; Krog-missile... range 900, d/s 94; Krog-cannons... range 300, d/s 300. Together it is 1019 damage points/sec where about the half is lost due to the high intensity of the annihilator laser. But even if we don't count it away but directly compare the damage stats we'll get Krogoth: 1019 | Matero 690 and that means that it does twice as much damage as maximum possible and three times as much damage as I consider "balanced". Yuck, take it away...

My score: Too bugged and unbalanced to be true.