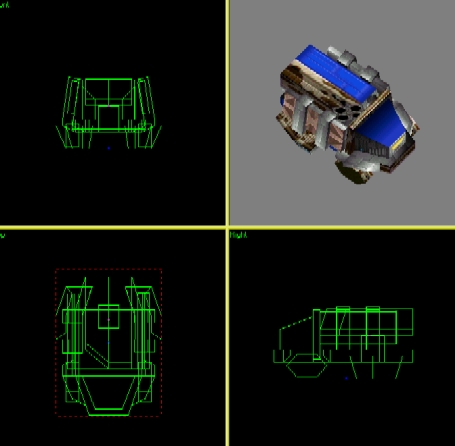 Buildpic: The model is too low poly and set in such an angle, that the viewer have a hard time relating to the true form of the object. What you see when looking on that image is a giant logo texture, four launcher holes and something bright on the bottom. I assure you that this unit looked like a kbot to me first [1]. The background is a full score picture, where I don't have much to complain on [3]. The merging on the other hand is very messy and a bit self-denying with over-exposed textures in front and parts next to them that don't seem to ge any light at all. The logo texture also manages to kill off much of the actually rather good shading on the sides (if you manage to see them, that is) [1].

Model: Rather cool model with a heartbraking face count. There are so many unseen or even abused faces here (the best example is a cube in the middle of the model that is never, never seen, but still uses up 12 faces to create a cube with 6). The tracks are ugly (all four) and need to either be remodelled or removed and exchanged into two solid ones or wheels [2.5]. The texturing is a mess... few textures have been rotated to fit the ones around it, many should be different (as for example the one next to the logo face on the turrret. It makes much of the turret "invisible" due to conflicts with the rest of the unit) while other resides on useless places in beleif that they will some day see the player staring down on them (which will never happen) [2]. The 126 faces heavy corpse is almost completely textured in the same tex and those of you that read many of my previous reviews will know what kind of score such corpses get [0].

Balance: The Jeager costs twice the energy and 2.5 times the metal of the Arm Samson. For that costs, it is equipped with only 50% more armor and just a slightly more powerful missile (that sure looks more powerful). Just so I don't get roamed by people that try to explain the superioty of Jeager's weapon, I feel that a close-up comparing is needed. Now, the J shot does have longer range and it got a slightly higher d/s ratio while it can turn faster when chasing the target. On the other hand, S got a much higher velocity on the weapon and weapon speed is actually everything when encountering enemy aircraft. You see, if J manage to nail a Hawk, it's because of pure luck while the Cobra flak tower is deadly to the max when attacking with almost instant shot-hit weapon. To be at least somewhat useful, a level 2 unit must be at least three times as cost-effective than their level 1 counters (just look on the Raider and Goliath) while this unit is hardly even better than one Samsons (and I'm not even counting the 2.5 Samsons' costs that you have to sacrifice to construct one Jeager).

My score: Take it away please... NNEEEXT !