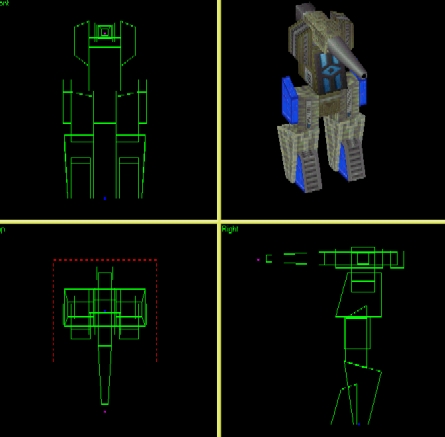 Buildpic: The angle of the unit is very nice. It reminds me of a unit overlooking something on the horizon or just walking through a field slowly, though not exadurating it so much as to make it stupidly obvious. I see no flaws with the unit whatsoever [4]. I really like this unit’s background, as the walking though field bit could take it there but the sky is nicely done. The faint clouds remind me of cirrus ones. If you look right between the areas where the field and sky meet as well it gives the illumination that you see a mountain range in the distance [3]. Despite the fact that a unit that looks like it has one eye is walking through the tall, golden colored grass it sticks out a bit because of the texturing. It seems that night is approaching in the picture though so I would expect the unit to be a tad darker. The shadows are perfectly placed (even though I may have put this in the wrong part of the buildpic review) and to this I dub a 10. A side note on this part was that I looked at the non .pcx version of the buildpic before this was submitted and saw a large difference when I laid eyes upon the .pcx. I assumed that program the creator used to change the format screwed it up big so I disregarded the .pcx [3].

Model: When I first saw this model a while ago, I just stared at it for a while trying to take in this interesting unit. It has no arms and the main weapon is above it's head. I even envisioned it firing and the recoil being so great that it would fall over backwards ^_^. The model is completely original and interesting to look at. The only issue I can see with it face wise is that the barrel area needs some work. I see 6 useless faces right off the bat, only three if you don't count rotating the barrels and the holder. From an engineer's perspective this is completely unacceptable. Seeing how I am more of an artist than an engineer though, this doesn't bother me as much, so I only see three useless faces ;-). Minimal point loss here [3.5]. I am beginning to wonder why there is no CD:3D. It seems to me that either people are too lazy to add it in, don't want to add it in, or are forgetting a lot. In this model the only trace of it is on the barrel, where I must say is done perfectly. The rest of the model has none hatsoever. The mysterious job on this catches me, seeing an eye like that instantly reminded me of ancient Egyptian artifacts and or temples. I can imagine the fear struck into the enemy when they see an army of these Cyclops type creatures swarming into their base. I know that would certainly scare the living shit out of me :p. Team textures are placed satisfactorily (I hope that's a word). The Earser and Fido are closest to it in the shading of the textures applied but I think it's a bit too dark [3.5]. The corpse looks totaled and at certain angles it looks well textured CD:3D wise [1].

Script: As soon as I was finished building one of these I chose to take it out for a test drive. I must say it looks decent when walking but two things bother me. The unit takes an extra one or two steps in place after it reaches it's destination. I'm not a scripting god and actually failed scripting class in my opinion so I don't know if this is fixable or not. The recoil is adequate. Now for the odd thing about it (no pun intended). While this unit is walking it bounces side to side above the torso area, well I tried walking and noticed that I don't bobble side to side or bobble at all for that fact but I'm human and this is a robot so I compared it to a few other arm k-bots. Out of those the only one that bobbled around like a drunken person was the adv. k-bot (and with all the work he does it's no wonder he bobbles ;-)) I gave this an eight because I just plainly find the upper torso movement /different/? If they can convince me otherwise I will add points.

Balance: A first impression when I typed in the +showranges command into my console and held down shift to compare ranges of this to other units such as the Fido and Lugar were /Holy shit! This thing has a really farking long range!" I went searching though my totala.hpi looking for an explanation for this and found the [ARMFIXED_GUN] which Storm thinks is the Guardian. Now why is the Guardian's gun on this thing I wondered, I then went looking into the Guardian's and Luger's .fbi's to see. In the diagram below inside the parenthesis that is saying how much more (m) or how much of (of) the Oddity has compared to that unit. Based on the charts below you really can't compare the Oddity to the Luger because it's so much more powerful than the Luger! I can basically dub this unit a /Mobile Guardian" because it has the exact same range and dishes out the same damage. If this were true then the mobile ness comes at a large price because it costs roughly 1.5 times more than the Guardian and only has 70% it's armor and 85% its sight distance as you can plainly see. This thing also SUCKS ALL YOUR RESOURCES DOWN when you build one and takes 2.3 times as long to build as a guardian. Nonetheless though I'd say this is invaluable and overpowered if used correctly because of the sole fact it's mobile. Think about it...this thing could dodge a Guardians fire. If used in a large group of units though where you can't control it individually this thing seems right. So in the end it's based on how you use it.

My score: I really enjoy the idea of a mobile unit like this. I don't really know what else to say...besides the waddling. :P