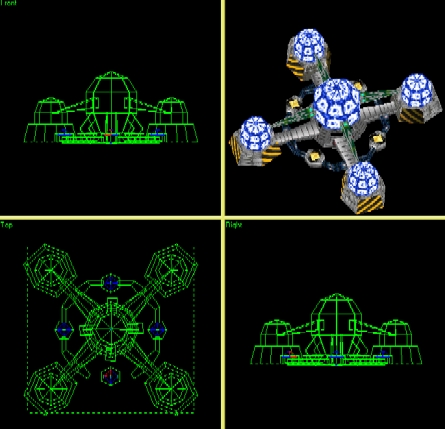 Buildpic: Buildpic: I like the angle, and there seems to be some shadow, maybe increase the amount of shadow a bit, otherwise I give this an 8. (Unit 3, backround 2.5, merging 2.5)

Model: Though this model does have a few flaws, and a few faces that could be removed on the underside, I think it's very nice. The unit has a very high facecount though, so I must take some points off there. Love the texturing, and it seems to fit in with other Arm energy plants. One other question though, where is the corpse file? (model 2, textures 4, corpse 0)

Balance: Let's compare this to the Arm cloakable fusion plant. The fusion plant costs 42058 energy and 5420 metal. This unit costs 61323 energy and metal 9276. The buildtime for the Furtive Atomic Reactor unit is 157895 though as compared to the Arm fusion's 105487. So the costs are about 50% more than the Fusion plant's buildtime, energy costs are about 68 % higher, and metal a bit less than 50 %. Add this to the units output of +10,000 energy and I'd say this thing is overpowered greatly. The cloaking costs for both are about the same which for both is about half the units max output. My suggestion is to lower the max amount of energy it makes, and with that lower the clock cost.

My Score: I really like this unit's buildpic and model, not much else though. Still the bp makes up for the balance, well not really.