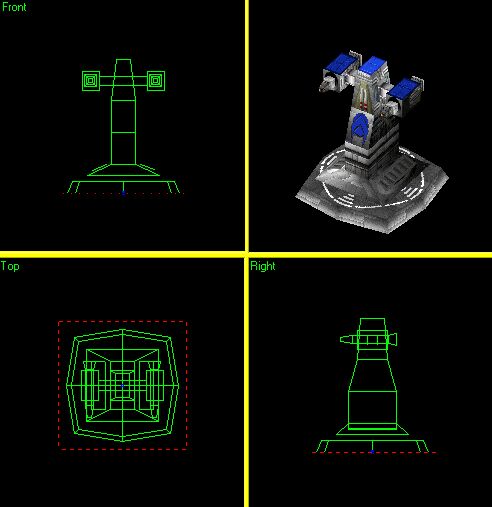 Buildpic: The unit looks sloppy, and on a bad angle, and was taken right out of 3DO builder (noted from the telltale signs of the panels being blue, instead of red). You can get a better effect if you used a render for your buildpic. Try Rhino 3D [1]. The background reminds me of the playful cartoon TV shows for toddlers, and looks about as silly looking as one. It also doesn't have an appropreate light source. What you need, is a more realistic background. There is a balance in backgrounds. It has to look real, but it can't be a real photo either. Looks around TAU, and I'm sure someone can supply one [0]. The lighting and shadow directions are correct, but the shadow doesn't conform to the unit itself. As well, the angle is completely wrecked to the background [0].

Model: The model is ok, but it could be better. I dislike where the point of rotation is on the unit. Maybe if you moved it to the middle of it, it would look better. However, if you do that, you'll need to put the reloaders on the sides of the turret, then instead of the base, where right now make me wonder how you can fit such big missiles into that tiny wee space [2]. The texturing doesn't look OTAish, (and nor does the model speaking of which) and the textures are all metalic. You need to add some lighter textures, because right now it doesn't look right. [2.5]. The corpse is alright, but the missile sitting in the stand? It should of been blown up if this thing's wrecked. Remove it [0.5].

Script: This definitely needs a mention. When the turrets fire, they (visually) fire straight out of the launcher. Soon after, a hatch opens and a missile slides into place. It is really well done, but it can be even better. Instead of the missile magically slipping into place, why don't you have grasping arms that slide it into place, and instead of those ugly blocks where the missile goes through into the hole, have a clamp, that releases (opens outward) when firing (for example, goes from |~| to /~/, to release the missile). If you want to impress me even more, have the missile drop slowly out of the launcher, then flying from that point. As mentioned before, the turret's rotation is very ugly, but that's a model issue, and not script, so I'm not counting that part.

Balance: Uhu...this guy is extremely powerful. I mean REALLY powerful. Although the d/s is fairly acceptable, the range is maddening. I had TWO of these beasts took out an AI Arm level one attack squad before entering their own weapon's range! I mean, why the hell make Punishers these days, when you have these things? Buildtime is also out of whack, especially since an Advanced Construction Vehicle can nanolathe one in about twenty seconds (compared to most level two defenses, which take like five to ten minutes). This unit's line of sight is also insane, which would make the Targeting facility obsolete for anything within it's sight range! It can hit almost at the tip of it's range unassisted. Take a look at the screenshot I provide you with here. Does that look like a real line of sight? Like geez...I would build these just for the Line of Sight, if I were very, very cheap. Costs are also low compared to the weapon. I suggest that you cut the range in half, increase the buildtime to be aligned with other level two defenses, and make sure it can't hit aircraft...(yet to try that theory yet). Don't mess with the damage, because reducing it would make the size of those bloody missiles out of proportion, and it's really not necesary.