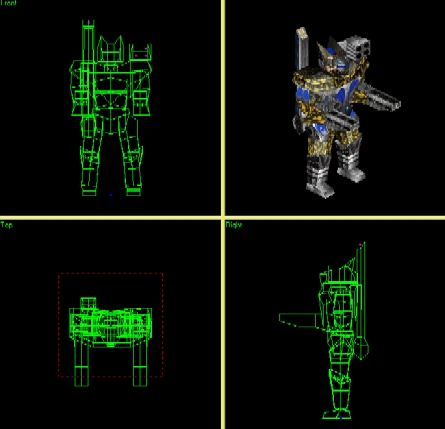 Buildpic: To start off I think you made this buildpic way too dark, please lighten it a bit. Because of the darkness it's hard to distinguish parts from one another so I'll have to take points off for that. The smoke coming from above the gun seems to be too dark, so I can't really tell if it's smoke from the gun or just a single dark cloud [3]. I think the backround seems too plain and boring, lighten it a bit and add some objects between the foreground and backround to give it a nicer look, maybe some different textures for the backround would look nicer too, unless you're trying to give this an /evil" type look. In that case you've done a great job, just it's too dark [2]. I can easily see this unit in that type of a backround [3].

Model: Aaaaaaaaahhhhhhhhhhhhhhhhhhhhhh!! Too many faces! First thing you should do is open the model up in the 3do builder and flip the model so you see it from underneath, I see usless faces on the underside, which is basically one of those things you should be expected to do these days. If you could possibly, try and think up a design that's more face efficient [2] The texturing job on this model is /unique/. In-game this thing actually looks like a cheetah or leapord or somthing to that extent. Because this units textures are so /unique" though it doesn't really fit in with any OTA unit I've seen, heck I don't think even the Kroggie has a single camo texture on it! I see CD:3D, but it seems a bit messily done. I also almost forgot to mention that the Core logo textures are greatly abused, get rid of some please [2]. The corpse owns, besides one or two faces that should appear, but it's too good to take points off just for that. It may be just that my unitviewer doesn't display certain textures [1].

Script: After staring at this thing walk for 20 minutes I think that it looks like it's dragging it's legs or has a serious limp, please improve that, I dunno how to because frankly I've never scripted a k-bot before, and I probably never will. The recoil is acceptable and the the part where it lowers it's massive laser and fires it seems well done to me, but those legs... it reminded me of how a penguin hobbles along.

Balance: Oh god, this is gonna be hell to balance... Let's see, to start thing off this was supposed to be a lighter type faster version of the Krogoth right? Well if so I think you're right because to start it's max speed is about twice as fast as the Kroggie. It's costs are also lower but what puzzles me is that it takes longer to build than it's counterpart? Heh, this unit also has a weapon alsmost TWICE as powerful as the Kroggie's headlaser. Then again that laser sucks 4000 energy. A plus for the Krog is it has AA missles, the guass cannons on both untis do the same damage, but the MKII's have 2/3 more range. I can tell you right now to reduce range and the damage done by the guass cannons by about 1/3 at least and if you really want to keep this a /scout type Krogoth" I suggest you don't have any weapons more powerful than it's supposedly /stronger" counterpart.:p Ok here's an overview, the MKII is faster, stronger, and cheaper than the Kroggie enough said, overpowered.

My score: This unit with it's custom textures, overpowerful weapons, and waddling like walking script, not to mention it's badass BP catch my eye. I shall keep it, and use it to terrorize the Arm with ^_^. Please improve it though.