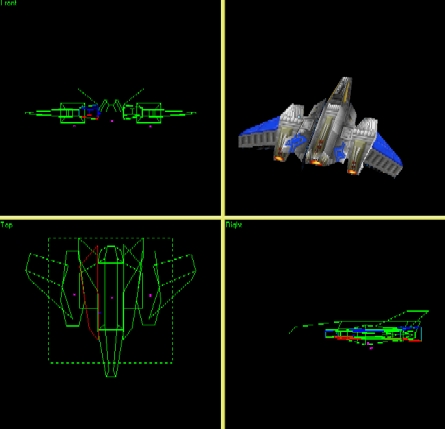 Buildpic: Again, first of all... this is another of those pics that I had to size up from 64x64 pixels to 96x96, therefore the cornyness. The pic itself, however looks very nice. No flaws as far as I can see.

Model: This is a very interesting model, but sadly it doesn't fit into the game at all for quite obvious reasons. I'd suggest to keep the main hull, mostly as it is, but shorten down the nose. Then remove those secondary engines and make the wings a bit larger (thus make them fold into the body, not up... it would be more ARM that way) and you are set. The fact that the groundplate isn't aligned to the body disturbs me [1]. Now, what looks even worse in-game is the texturing that itself can be considered pretty well, but fit hideously bad in OTA. The unit is very messy in general, has no form of Cavedog texturing (the planes are textured in different ways on the two sides) and of course no CD-3D what so ever. The arm logotypes on the tail wings look bad [1.5]. There is no corpse, but planes aren't punished for that [1].

Script: The wings are folded up, not in, as characteristic for Arm airplanes and the unit makes very nice wakes when landing in water.

Balance: This unit has a serious problem. It costs just as much as the Arm Thunder (well, two metal units and a bit energy more, actually) while being generally superior. First of all, the reason why I even bother to compare this unit to the Thunder is because it share main weapon (bombs) with this unit and both have not similar, but actually identical attacking patterns. Now, this far it looks good... same costs, same weapon, one can think, but NO. This unit isn't satisfied to carry bombs only, so just for the sake of it, some missiles stolen from the Freedom Fighter in the same plant have been implemented into the Seagull. But that is not all, because in secret, this unit's speed has been upgraded compared to the Thunder (from 9 to 12), meaning that it makes it's run faster, has higher chances of surviving and deals a lot more damage/second, since a run takes much shorter time, not to mention that it also turns faster, meaning that a run takes even less time. Yet there is more to come... This unit's armor plating is almost twice as effective as both the Thunder and Freedom Fighter together (Thunder: 320, F-Fighter: 196, Seagull: 900), which is kinda sad. And still, there is one thing that the Seagull can, that none of the others can, which is landing in the water. So to sum it up, this unit that in comparison to the Thunder makes more damage/second, have an extra weapon which can hit aircrafts (and hit them hard), is faster, more agile, holds an extreme armor superiority and can land in water... all for the same costs. Heh, as if...

My score: Hmm, the bomber/fighter combination seems interesting, but the balance of this unit is seriously lacking.