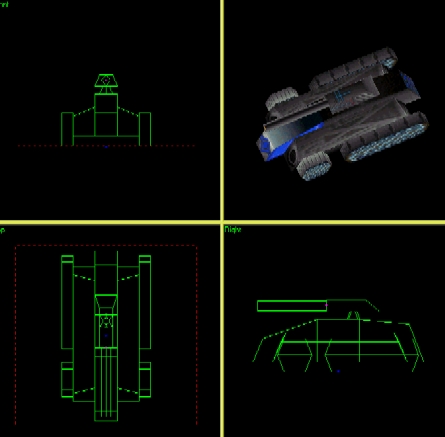 Buildpic: The overall picture is very good and even OTA:ish, but it feels like the turret is a bit misplaced...

Model: I can instanly spot special signs that this either was one of the creator's first models or that he was either drunk or in another way, not in clear mind. I mean, how often do you forget to correct the size of the groundplate? As far as I see it, it's the same square size that when you start up the 3DO Builder. The model concists of about 60 faces that mostly have been abused and placed where faces are least welcome as on the inside of the tracks for example or on the sloping underside of the same tracks. There is a small turret-holder that mostly reminds me of a fly's small neck. If abird happen to land in the front on the barrel, the whole construction would snap. The turret itself is too small, the barrel too short compared to the weapon this unit posesses and the cannon lacks flares too. Furthermore, the hull looks very squarish although it has been rounded up quite a bit [0]. The Textures are awful... too dark and messy, they offer exellent camouflage among corpse debris in battle. Logo textures exist, but are hardly seen in-game since the bright one is placed on a odd angle and one only see fragments of it sometimes while the front arm logo is too dark, as the rest of the unit, for that matter. No 3D way of texturing have been applied (except for the barrel) and while that isn't any surprize, it looks awful anyway [0]. The corpse does also go down the drain for quite obcous reasons: no removed faces and same texture all over [0].

Script: Just an aiming script with a recoil and no flare (well, the flare sequence is included, but the model lacks a proper one.

Balance: Ok... You know why the Luger is a level two unit despite it costing less than the Anarchist? Because it is powerful... and I doubt that you can take the weapon, move it to level one and put it into a tank with even more armor for the pathetic cost of 20 metal units. This is where I also started to wonder wherever the creator was a newbie at the time or high on something (like übercrack or eXTAsy for example). Now, now, I don't want to be evil, but still, the unit is horrifically unbalanced. I sugeget you should bother to make a weapon with about 450 in range, much less accuracy and about 2/3 of the current damage/second.

My score: It took me actually more than a half an hour to decide wherever I should review this unit or not. I saw instantly that this unit was a newbie-tactic job and didn't want to be harsh to wormhole's allready beaten up average score, but since the unit is avaible to the public it couldn't be bypassed by any personal ffelings... If you downloaded it, review it, no matter of the score. And nah... the unit has been in my trash bin for five minutes and counting (I need the UFO for balance comparative purposes).