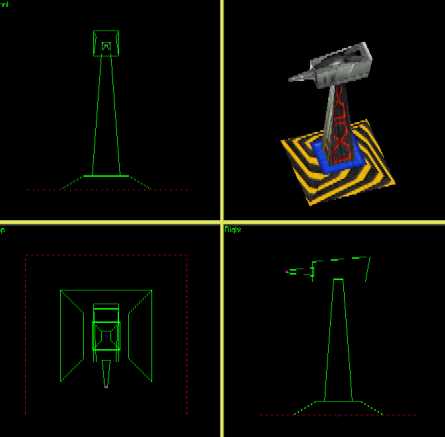 Buildpic: The unit itself is standing in a very standard position with very few special effects. The texturing on the picture does however not look like the texturing of the unit and some points fly away. The very evil "warning" pattern that does exist effectively burns in my eyes [1]. The backgrund is pretty dull, but nevertheless a bit variated [2]. The merging is far from optimized. The unit does not stand in any angle that is even close to be "normal" and the shadow from the base plate are missing completely. The barrel is also way too dark, but the rest does have a pattern, even if you have to look carefully to spot it. The light comes from the same direction on both the unit and the background and not from the far left, as the eye tend to see it first [1].

Model: Very simple model, few faces, only two really useless, a glimpse of an innovative design. The barrel should be bigger, the turred should be a bit more rounded up [3.5]. The texturing sucks, mainly because of those yellow/black stripes on the base. The barrel should be lighter and a logo texture should be placed on the gun somewhere. Maybe it would look pretty interesting if only on one side. I've made an own retexture [ attempt ], just to bypass the worst of the damage. And by the way, where is your CD 3D [2]. The corpse is pretty ok, but there should be one or two lighter textures placed out and the long "neck" should either be lying flat or be broken and lie down as "/"... [1].

Balance: It costs half as much as the LLT and does half as much damage as it on almost half the range (180 to 300). But even by cutting the costs by half, it does not support a four time weapon disadvantage. You know, it actually costs more than the Flash and have less armor. Even not counting the superioty of the mobility, this unit is long obsolete. To make it effective, you can actually cut the costs to 40M and a proper ammount of energy.

My score: First of all, I dislike the entrance of EMG units into Core weaponry. Core does not and will not have EMG because it is just as Arm only weapon as the flamethrower for the Core. Anyhow, I will keep the unit because it has strategic potential and not because it will waste the recources of the AI (har-har-har).