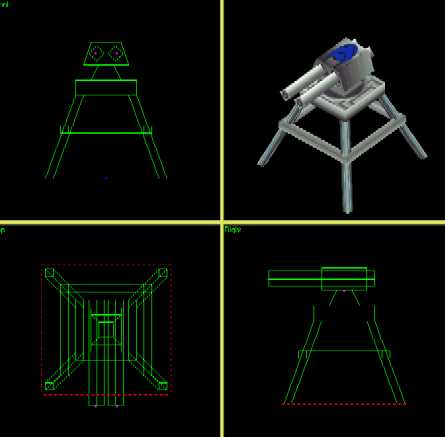 Buildpic: The unit completely lacks all kind of textures standing there as an unfinished nurbs model. It is also clearly too rounded up and does not look much like the unit in game, although sharing much of the basic shape. It also looks very diffuse... [1]. The background is boring, but the layer does soften up the damage a bit [2]. The merging is very questionable. There is a sharp shadow behind the unit, yet the unit itself is randomly shaded all over the body. The background also gets lighter where it theoretically should be darker. In any way, this is not a standard procedure when it comes to illumination [1].

Model: Such a simple model can't have more than 30 faces totally, I though... Yet imagine my surprise when the body alone was worth 60 faces. There were alot downward facing pesky annoying things, there were a bunch of textures that are simply placed behind a texture. The turret holder is just as needed as heavy rain in Britain and the barrels can be cut in half. I've accedently made an own [ version ] that is as always full of red textures (that stand for useless faces). Now leaving the faces behind, the model itself is very simple and I lack most kind of details, like for example more slender construction with a barrel or two standing next to it. I also lack the flares... [2]. The texturing is well... so repetive, it's not even funny. The only one seen in the game is the Core logo on the top, the rest of 'em are just bright white without any indications of being aware of it. The Cavedog 3D is, of course, missing, but there is basic shading that makes up for most of it [2]. The corpse is neither wrecked, nor textured properly (only two textures are used), so by StormDefenitions.h, there are no points to give [0].

Script: Aiming and recoil. I'd liked to see some flares flash by, however...

Balance: This unit costs 100 more metal units than the pretty famous GAAT Gun while it costs 900 E less. For these changes, the Marauder is equipped with a slightly shorter range on the weapon, but more than twice as high damage/second ratio. Even if we count in the fact that it only got half as much armor, it is still too powerful. Drop the range to about 290 or the damage/shot to 70, then we'll talk...

My score: I'll keep this in my backup folder, in fact... mainly because of the sounds.