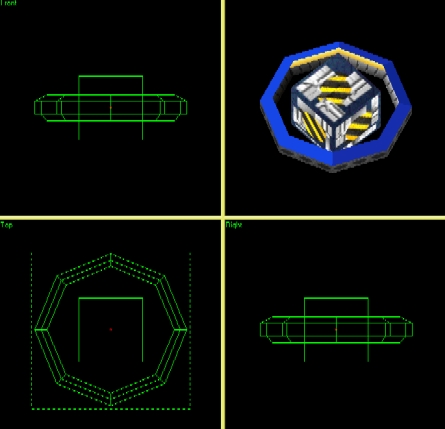 Model: Although this unit sure is face-efficient, it does by no means fit into the TA weapon arsenal. I can't point a finger on it, but a spinning cube surrounded by a ring is somehow an outsider in the Cavedog-created world. Thus it is really big (size down to 80%) and it floats in midair just like spinning cubes should not (well, most spinning cubes actually do float, but wth, I have to compare with something, right?). The fact that it lacks any real barrel is a bit distortive since it just fires cannon shells from the middle of nowhere. The flare is too big [0]. The texturing is very nice. No flaws as far as I can see [5]. There is no corpse, but airpl... erm, aircubes don't care [1].

Script: The cube spins around pretty much as it desires to. The aiming is instant.

Balance: There is just something that tells me that this unit is a bit overpowered. Could it be the fact that it got four times more armor than the Phoenix, the fat bomber that eats damage for breakfast or the very long range of the weapon? No the point is that this is an airborne Guardian (you know that heavy cannon Arm forces use to install in their defences to pester your invasions). It is heavy, it strikes good, it is cheap and it is very mobile. Try to retreat with a normal Punisher, would you? If you take one Cubix and set out a patrol rout where both ends are very very close, you have a hovering fortification nicely tucked in. It got pretty much less range, yes (850 to 1250) and it only got half damage/second. It got a bit less armour too (1870 to 2477), but that number is damn gross for a plane and it cost very little. The Arm Guardian is worth 1946 M, for that costs, you can pump out 5.7 Cubixes, who's total firepower will be 287 damage/second (i.e. twice the Guard) and total armor rating of 10766, which is 4.3 times more than the Guardian and it is mobile and it can be placed anywhere on a map. Sure the Cubixes are vulnerable to air attacks, but so are normal Guardians. This is a prime example of an overpowerful unit. To fix the errors, you'd better chop the armor to one fourth.

My score: Not OTA, no citizenship in my totala" folder...