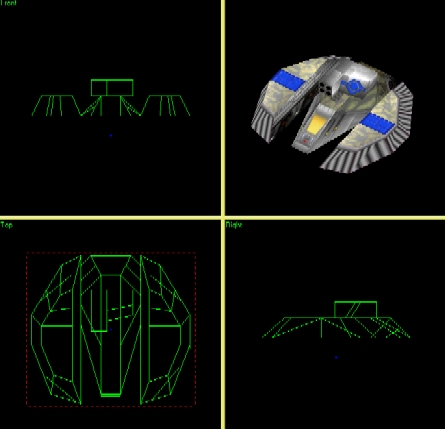 Buildpic: The unit seem to be flattened by a hammer. Everything is flat flat flat, including the prespective. The unit is highly affected by the messyness syndrome that affects one buildpic of twenty... And BTW, 95% of statístics are made up on the spot. Anyway, there is a rocked that try to escape from the smashed unit leaving a trace of smoke, similar to an octopus, but alas, it all looks just like an oversized barrel unless you move the screen closer to your head and see the details. Further, the unit is a hovercraft and it is supposed to be hovering and not lying on the ground as another roadkill. Check out the classy OTA hoverpictures [1]. The background is very ill chose as it has exactly the same color as the unit, which makes that logo texture on the left side seem to magically hover in the air, just like this actual hover don't. It also insanely dull and flat and the mountain in the bacground seem to be exactly out of context and fit in just as well as a white lion with severe amnesia among small, burning red mice [1.5]. The merging is well, almost none-existant since the little shadow beneath the unit can't really be traced to anything and the unit itself is complety unshaded. The missile and it's smoke should also give some kind of shadow on the ground, but alas. The unit is also in a bit defective angle compared to the background [0].

Model: The main body is hanging very loosely between the hovertracks just like an average arm clone that has eaten too many tacos and the top plateau is just wide enough to not support the turret. Elevate the body or die. Have you ever hold one of those slime balls they use to sell in toy markets (the ones you can yucky around with because it feels so slimy) and then thrown it on the floor? Well, the result is a splat with the very interesting form of a thick blob in the muddle that goes thinner and thinner out as if the semi-liquid tried to escapre from itself. This is actually more or less how this unit looks to me. The tracks have been so rounded up that they no longer look like tracks but rather some kind of pillow that small children with no brains have dansed around on. The launcher could have been fine if I were a regular player with >< that large sence of quality, but sadly I am a reviewer with high demands, so what you are gonna do is to nicely place a spinning barrel there that spins say 60 degrees for each missile fired (it acts like a burst, I know... fire one, spin very fast, halt for a fragment of second, fire next and so on. That would look really classy) [1]. The CD:3D is lacking, making the tracks look even uglier than they are, but the overall texturing is very OTA and the logo stripe is fitting as ever. The launcher looks a bit budget [2]. The corpse is very nice [1].

Balance:  He-HEY. This man got just a snap shorter range than the OTA Rocko (370 to 400) and got half as much armor, but does as much as three times more damage/second and it is pretty good in hitting aircrafts (yeah, on occasions whan they move slowly enough, but your ordinary Rocko won't hit an aircraft even if you nailed one to the ground). Since it is a hovercraft, it's pretty obvious that it can go over water and it is also almost three times faster for slightly lesser costs. However, the Hovercraft plant is an own chapter, since the plant itself costs horrible 2000 Metal. Technically, this unit is very balanced, but when comparing to another habitant of the Hovercraft plant, the Anti-Air Samson-wannabe Swatter, it turns out that for slightly higher costs you get a weapon that makes roughly 25 d/s on a 650 range with the rest of the stats more or less equal. As my primary rule, not letting any unit render any OTA unit obsolete, I must saw this unit's balance. I suggest either a range cut with 170 units or only 20 damage/shot.

My score: While being a nice diversity in the Arm hovercraft plant, this unit is horribly ugly. I like the name, though...