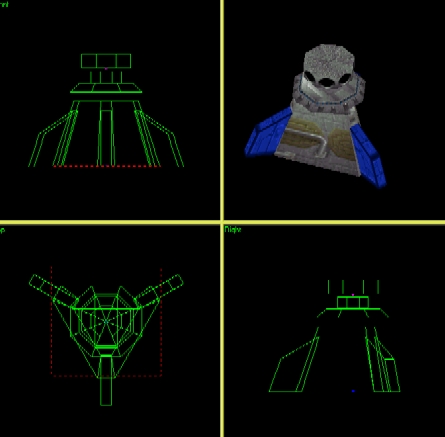 Buildpic: In all ways perfect, I can't require much else.

Model: First of all, it's way too big... I mean, since it costs less than a standard torpedo launcher, it should not have twice the size (well, it got the same footprint, but the model is sticking out everywhere and it doesen't look especially good) and the main body should be flatter. The face count is acceptable and there are no really useless faces (although there are some that are qustionable, as for example the eight faces on the very top that could be cut to four and no one would ever notice) except a part that holds up the "head" of this unit much like a neck. It take up place but is only seen by Lurkers, Snakes and other submered creatures (i.e. not TA players) [2.5]. The texturing is allright, nothing especially good or especially bad. It got just the right ammount of logo textures, but it lacks Cavedog 3D vision [4]. The corpse is pretty much worthless, I'm afraid. It is not wrecked in any way and it's awfully textured. Not a single one of the textures have been turned good, but are just randomly scattered and gives an impression of an ugly sculpture rather than a wrecked unit [0].

Script: Actually none... It doesn't even aim. Even through I understand that this model was formed and textured so everyone would understand that this guy can fire anywhere, it would look much more descent with aiming animation. That is pretty much that makes TA into TA. A suggestion from my side would be to randomly turn the head around random x 45 degrees after every shot.

Balance: Right... (Storm refuels his chainsaw). First of all, this unit is submerged and it means that it is unaccessable to long-range artillery from cruisers, air strikes and standard bombing runs (and other standard weapons) like the ordinary torpedo launcher was. Furthermore, it is equipped with almost tripple armor ammount and does actually cost less than the OTA torpedo launcher despite having equally powerful weapon (well, the omnitorp is actually a fragment weaker and does only half damage to the subkillers as the Shark) so the balance score can not in any case be greater than null.

My score: (Storm roars with the chaingun and saws the omni-torp into very small pieces)