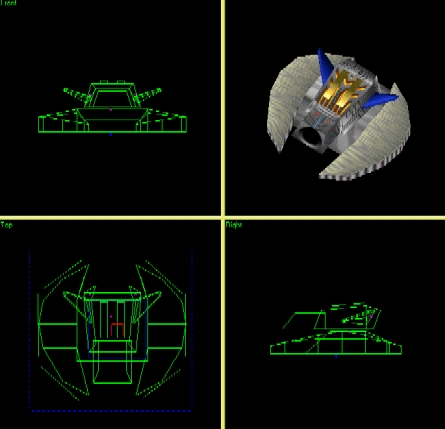 Buildpic: Wow, this is just amazing. This thing is perfect. The reflections are there and done nice. The ripples are a great touch. The angle is nice. Shadows are in place. I can't seem to find anything wrong with this. I'm speechless.

Model: The model itself is another one of those huge cannon ones as seen above. Besides the cannon size the unit seems to blend in well with other Arm units. The cannon seems a bit too large to me, but that may just be me. There are 2 faces in particular that I think should be removed on te underside of the model. They are those on the underside of the /wings" with the team colors. The actual amount of faces seems perfectly acceptable as well [3]. The texturing style on the unit goes well with it's shape, making it seem very OTAish. The team color textures are placed perfectly, but alas there is no signs of CD:3D [4]. I'm sorry, the poor corpse seems like it was ran over by a steamroller. It also must be colorblind because there is ONLY ONE texture used on it. No points there [0].

Script: The way the weapon spreads when shot it pretty nice. Other than that I think it's standard hovercraft scripting with the wakes, recoil, etc.

Balance: Comparing this thing to the Wombat, this is what I found. The Wombat is about 3 times worse than the Delta is terms of it's arsenal. The Wombats weapon with a range of 670 and damage of 33.3 a second didn't match the Delta's of 650 range and 113.6 damage a second. The spray weapon is inaccurate though, so it only works effectively against many units. The Wombat is much faster than the Delta. The Wombats buildtime is 2x that of the Delta, so this would give the Delta a major advantage against the Wombat.. The sight distance is slightly more, and The energy and metal costs are higher. The Delta has also at least twice as much armor...

My score: This unit has the best buildpic in a unit I've reviewed so far. The burst weapon of the Delta is very nice......the supplied sounds I like and it's fun assaulting the commander with a swarm as said in the readme. Good job! Other than that, meh...