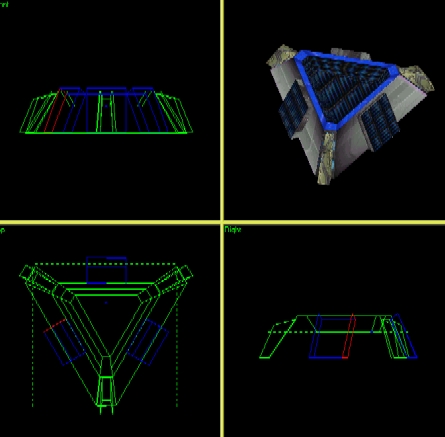 Buildpic: Besides the very dak picture and the suspicious illumination from the left, this pic is very good.

Model: The shape of the unit is interesting and the face count is very low (but could still be lower dues some very principal design errors). The size is in my opinion rather good, but I wouldn't object if the size was increased a bit [3.5]. The texturing sule looks good, but it's far too few solar panels to count up for the energy output. Almost five times as much as a standard solar, yet it have five times smaller panel area, meaning that this panel is 25 times more effective and that is just absurd. It also lacks much of the CD:3D [2]. The corpse is fine... [1].

Script: Just as the ordinary solars, this one can be shut down to receive tripple armor, but at the cost of zero energy production. However, there is not the slightest indicator of the states, not even a light blinking. Sue me if I'm wrong, but I require proper script and covering of all the vulnerable panels when under attack. This is TA where it is best... a big troop invade a base and all the solar collectors in there that are close enough to the battle to get damaged close like flowers.

Balance: A standard solar require 7.2 metal and 38 energy for each energy unit to be produced. The Fusion powerplant i more cost effective with 5.1M and 36E needed for every unit of energy emitted. Now, when I come to this unit, I am suddenly horrified that it need even less recources for the same output than the Fus. To drag it back in order, it should have about 6M " emmitance unit.

My score: Does not fit in OTA. (*Storm egnites the .ufo file*)