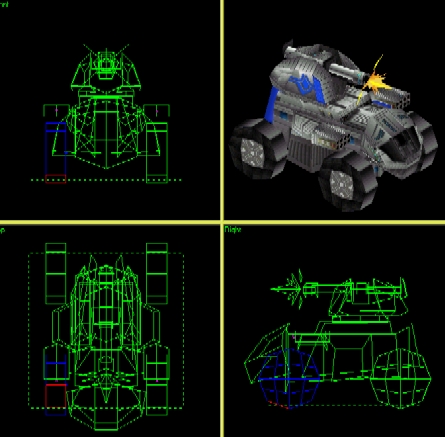 Buildpic: Well, seeing as it was the render of the tank at the unit site that first caught my eye, I'll have to give a high score on this one. The unit itself is absolutely superb, shading and everything is perfect, just a little bit dark but not too bad. A nice touch is the fact that the logo textures aren't glaring Blue/Red out of the picture like in so many 3rd-party pics [4]. The background is also very cool, a dark brooding landscape, however it is let down by one thing lacking when the graphic was converted to the TA palette: diffusion. The sky looks like it is 4 distinct colours, with diffusion (or /dithering" as it is sometimes called) it would look like the original render, a single graduated colour. One point off there but that could be regained so quickly by opening up photoshop.. The colours show up much better with diffusion also, in the orignal it is quite gray, so that is 1.5 points that could be regained right there - for the background  [1.5]. The merging could not be more perfect - that vehicle is driving on that ground, no doubt about it  - great job by M3G, lately he has shown even more talent for giving a heartless machine some personality in a render [3]. I noticed that the build button ingame is a straight resizing of the unitpic - it could have been cropped before resizing to make the unit appear larger on the build button.

Model: Argh! faces, faces everywhere! Only half kidding - the model IS high-ish poly for TA... The turret, sleeve and barrel all have faces that could be gotten rid of. quick face count: turret and missile launchers total 36, the turret alone is 41 faces, plus 48 for the other gun pieces, plus 39 for the flare! The flare is from the Vulcan/Buzzsaw and could easily be reduced, or better yet replaced with the flare from the Guardian. The wheels are an excessive 39 faces each; if overlapping faces were used for the sides and hubs that could be cut to 23, 17 or even 13 if you consider the hub faces aren't necessary on the inside of each wheel. Ingame? it's too small! That's rare, 3rd-party units are usually too big. A minimum 10% size-boost is a must (10% doesn't sound like much, but keep in mind that is 10% along each axis - it works out to be about 30% bigger overall). I would like to see the unit a bit wider too. Land units that are as wide as they are long look best when manuvering. The are no axles for the wheels at all and they appear to float in midair in 3dobuilder, but you dont really notice that ingame. Kudos for the animated wheels, ingame they improve the look plenty (2.5). Texturing is nice, the overall metallic look and lack of camo textures means it doesn't necessarily fit in with standard TA units, but it is a good look, albeit too highly detailed to see ingame, especially with the model such a small size. The textures make the rocket launchers look deadly but they're not really... and again, you don't see the launcher detail ingame either. So, one point off for no shading, another off for too much detal [3]. Onto the corpse, firstly the textures on the body are too light and look completely white ingame, secondly I estimate 80 faces could be deleted from the wheels, thirdly I give it a full point because it is really wrecked and plenty of care went into the texturing, the wheels do make it look good enough { Storm's note: I would NOT give away full point on this. It is completely disgusting work on the wheels and only one texture/piece is used } [1]. Overall it is a good model. Like almost every 3rd-party unit I see, I think all of the points I made could have been corrected (and still can be) if the maker paid more attention to the unit's look and performance ingame.

Script: As a few of the people reading this will know, scripting is my strong suit when it comes to unit creation... but this one is not really worth counting. It is simple and elegant and works beautifully, and that is all it needs to do. Some small points tho: The wheels should stop immediately and not decelerate because they spin in place a little when the unit stops. I would really like to see the missile pods raised a little and become turrets because ground units do not turn to aim nonturreted weapons. Currently the choice of weapon is the non-turreted Rapier rocket for weapon 2 and 3, the Kbot rocket would be better for both pods and be more balanced because it is less damage per sec (see below). I'll mention the killed script too: if pieces shatter or blow off when a unit dies, then they should not still be there on the corpse model, simple as that. This unit is a more obvious example of this kind of mismatch: when the unit is killed the cannon barrel shatters, the body shatters, the turret flies off and explodes... but all three pieces are still there on the corpse. D'oh! Better to make a wheel fly off and delete that wheel from the corpse, it makes the unit's death SO MUCH COOLER. The cannon turret turns at twice the rate of the guardian, but that's a balance consideration too, so let's move on. No point in counting any of this, the script works well, and none of what I comment on is a cardinal sin.

Balance: Well, not to hard to figure out. This unit is a mobile Guardian that costs only 10% more metal and takes about 50% longer to build (in fact because of the workertime of the plant that builds the thor compared to the units that build Guardians, it will complete quicker unassisted), it's 25% tougher, and costs 20% less energy. It puzzles me that this is an Arm unit but the weapon is actually from the Core Punisher - arguably a worse weapon because of the bigger splash damage, the diffierence in range between Guardian and Punisher weapons is negligible, especially on a mobile unit. The extra weapons make balance worse but not much, because they are nonturreted and the unit will not turn to aim them and they also tend to hit the ground well short of their range. That is not a nice way to balance them though, they are more frustrating than anything else. The fast turret turnrate also makes balance worse, and the slow turnrate of the unit helps the unit aim even more. It is the same top speed as the Luger and much faster acceleration, I do not like such fast acceleration at all. The cannon is quite high and tends to fire over things close to it, but with the high armour it doesn't matter, this is a unit you will want to abuse by power-building as many as possible and shelling everything the enemy has from a safe distance. How to balance it? Double the energy cost and buildtime for a start, at least 1000 more metal to the cost, more if you want to keep the same amount of armour. Divide the acceleration and brakerate by 5. The other option for balancing would be to use ths script to force a longer delay between cannon shots, but it would have to be to at least 6 seconds reload time. I noticed two /movementclass/ lines in the fbi, one is the standard tank, the other is the amphibious tank movement class, guess which one counts ingame? Yup, it's amphibious. Very abuseable on many maps with water... I'm giving the maker the benefit of the doubt on that being unintentional, and not counting it in the balance score. Just make sure it's not amphibious if you revise it, ok? ;) or add another 400 metal to the cost at the very least. Overall, this is a very overpowered unit, but not nearly as much as an Uberhack Thumper :D so I'm going to be just a little bit generous... not much though.

My score:If it were Storm reviewing this unit he would be raging and throwing this unit in the incinerator I'm sure ;) I like it. Care, attention and plenty of skill has gone into the creation. All things that could be improved are things that a good unitmaker would have if he played with the unit ingame more, compared it to other units, and preferably knocked it around in multiplayer a bit with a friend... But sadly I can name few serious unit makers who do this. I consider this unit an uncut gem.